More than 300 people attended the event, which paid tribute to the four as the most extraordinary and impactful Israeli artists on the global cultural landscape. Gal Gadot appearing by video from her home in Israel said that unfortunately the flu prevented her from attending in person. In her remarks she said, “Thank you to the AICF for this award and recognition but more than anything for their contribution to the Israeli art world and their work supporting Israeli culture. Now, more than ever, it is important to stay strong as a community and to be proud of who we are and our heritage.”

As Haas thanked the AICF, she also told the audience about the death of her mother: “I lost my mother three months ago, and she is and will always be my inspiration and motivation,” she said. “I’ve learned everything about being the best person from her because she was that kind of person. But I also learned everything I know about acting from her. What are empathy and compassion, and how can we love other people regardless of how different they are from us.”

Asked what advice she would give to new young actresses, Haas said: “Keep the creativity and fire alive. It’s a combination of passion and compassion. But remember to also trust and let go because we’re all doing our best.”

Both Gal Gadot and Shira Haas play superheroes. Gadot plays Wonder Woman in the DC Extended Universe and Haas portrays the Israeli superheroine and Mossad agent Sabra in the Marvel Cinematic Universe to be released in 2024.

The AICF also honored renowned pianist Yefim Bronfman and Ido Tadmor, a prominent choreographer. The awardees all stressed the importance of arts funding, which had been depleted when COVID-19 kept audiences away from performance venues. During the pandemic, AICF launched a $2 million relief fund that helped support 1,800 artists. The organization has an annual budget of $3 million.

Asaf Zamir, the consul general of Israel in New York, referring to the US-Israel relationship said, “You know that it’s fragile, and you know that it has its challenges. When I was young and grew up here, Israel was just this general positive buzzword… Today, it kind of is taking a different direction… But I’ve seen firsthand how people suddenly view Israel differently through watching a TV show or a movie, or seeing a concert.”

AICF, a 501(c)(3) nonprofit organization in the United States, has played a leading role in the development of Israel’s arts and culture for the past 83 years, its name synonymous with culture in Israel. AICF’s ICA Awards honor Israeli artists in the performing arts, visual arts, music, design, theater, television and cinema. The 2022 ICA Awards winners were selected by an esteemed panel of judges as well as a public vote of art lovers worldwide. More than 4,000 people voted online, ranking each finalist per category.

“With so many outstanding artists in Israel, and so many of them succeeding on the global stage, it was very difficult to select the winners this year,” said Iris Reff Ronen, Global CEO of AICF. “I’d like to congratulate our four honorees and wish them further success in the next phases of their careers. They are true cultural ambassadors for the State of Israel and help to shine a light on Israel as a global hub for the arts and culture.”
* * *
About The America-Israel Cultural Foundation (AICF):
The remarkable artists touched by AICF’s programs have appeared in prominent orchestras, symphonies, ballet and modern dance companies, museums, galleries, opera companies, jazz clubs and concert halls the world over. Since its founding in 1939, AICF has provided crucial, early, middle and advanced support to over 18,000 outstanding young artists throughout Israel.

AICF is a 501(c)(3) nonprofit organization in the United States and holds 46a nonprofit status in Israel. For more information, visit aicf.org.

You can read the article here. 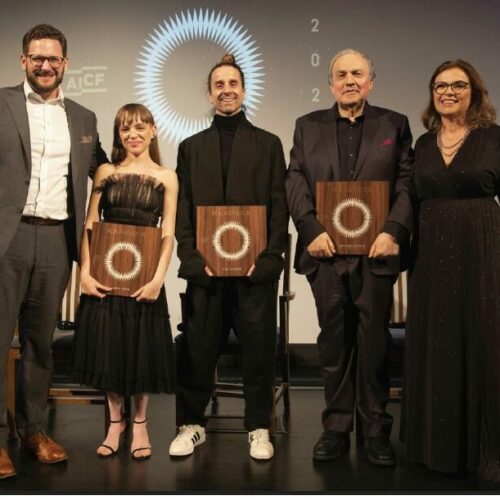