Launch of the “Damti Method” Book

Jill and Amnon Damti presented their method for working with persons of all abilities known as “The Damti Method.”

On Feb 23rd 2022 at the Tel Aviv Municipal Dance Library, Jill and Amnon Damti, a renowned duet of dancers, he profoundly deaf from birth, presented their method for working with persons of all abilities, including deaf, hearing, on the autistic spectrum, CP and others – known as “The Damti Method.”

Over 100 participants in the audience were exhilarated as the evening unfolded. The Master of Ceremonies, Mr. Daniel Alter, narrated beautifully. Videos were shown in which the Damti Method was used in a tour of Africa, as well as choreographing a youngster with CP.

Intertwined were dance pieces by Jill & Amnon from their “Two Worlds” dance performance, which is interactive with the audience.
The values of the Damti Method were presented, including acceptance of others. Short
anecdotes called “moments of light”, where children discovered their inner strength, were read from the book.

The book contains the full set of values to be used by facilitators running Damti Method workshops, as well as a full curriculum to be used for such workshops. Facilitators are/will be trained hands-on and certified by the Damtis in workshops.

A limited edition of the book, in English and Hebrew, was sold to interested individuals at the book launch. Wine and light refreshments were served to the delight of the participants.

Jill and Amnon, who are also teachers in the Freedom Writers Foundation, were invited to
participate in The Freedom Writers Foundation educational Symposium that took place in California from March 26 to March 29, 2022.
The four-day staff development and professional learning network coincided with the
release of DEAR FREEDOM WRITER, a collection of letters written by 50 student authors and responses from Freedom Writer Teachers across the globe.
One of these students, a 13-year-old deaf boy from Israel, was mentored by Jill & Amnon
Damti. 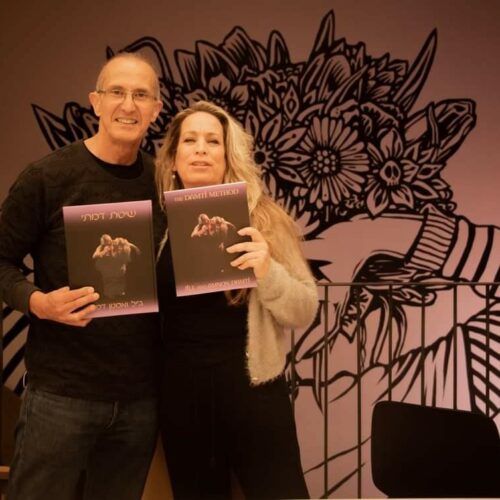