Described by The New York Times as “warm-toned,” Israeli Cellist Michael Katz has appeared as a soloist and chamber musician in various concerts and festivals in North America, Europe, and Israel. Mr. Katz has a great passion for expanding the cello repertoire with lesser known works and contemporary works. AICF caught up with one of our performers at the AICF’s Annual Gala on December 4th, to learn more about him and what inspires him to keep on playing.

1) What or who inspired you to want to be an artist?
Though neither one of them is a musician, both of my parents are great music lovers. From a very young age they would play classical music for me essentially all day long. Fortunately for me, they both have very different tastes in music so, even as a toddler I got to hear everything from Bach to Stravinsky, piano music to operas, etc. When I was three years old, my father showed me a video of a choreographed period performance of the Bach second orchestral suite. For some reason I was immediately drawn to the cello, and even though I didn’t start playing for four more years, I knew in that moment that I’m going to be a cellist.

2) What was your creative journey that has brought you to where you are in your career today?
Over my years of musical education I learned how to appreciate not only different musical genres, but also different musical activities. My teachers and coaches showed me different approaches to playing and analyzing music, and I saw how theoretical and historical study can greatly influence my interpretations. I always believed in trying to simultaneously express each composer’s unique personality as well as mine. I became fascinated in playing both new music and lesser known works by both well-known and lesser known composers. Because of that, one of my greatest enjoyments is in being creative with programing. In addition, chamber music has long been a great passion for me. Only chamber music gives you the opportunity to have a full dialogue with someone without using words!

3) What do you need as an artist today?
Having recently graduated with a Masters degree from the Juilliard School, I’m looking for more ways to get my name out. Getting used to life outside of school is not easy, and I have to learn some hard but valuable lessons. More than anything I need to keep on finding ways to perform, which again is not always easy when you’re suddenly out of the environment of an educational institution. I find that in periods when I perform frequently, it’s much more natural for me to communicate with the audience. I also need to find the right people and venues to realize the projects that are important to me. One way that could make a big impact is finding a manager.

4) What creative project are you working on now?
With this year being a big professional and personal transition, I’m putting a lot of energy preparing for several competitions, including the Aviv Competitions in Tel Aviv. I also recently thought of two unique projects which I would like to start working on: one is a project, which introduces music by Israeli/Jewish composers side by side with Arab/Muslim composers. This project is inspired partly by my friendship and collaboration with Palestinian composer Mohammed Fairouz. The second project will be a program that examines the music of composers who were affected in various ways by the Nazi regime. This project will explore the works of Holocaust victims, who are composers that works were designated as “degenerate art”, and the Nazi attitude towards older composers such as Mendelssohn.

5) Where do you see yourself and your career in 10 years?
Living in New York the past few years has been very good for me, so I would love to stay here as I see New York as a unique cultural center. Ideally I see myself creating the perfect balance between chamber music with various groups (a sort of a chamber music society), solo recitals which will allow me to put on special programs, and new music.

6) What does it mean to you to be an Israeli artist?
I think Israeli artists, especially in times like these, have a great responsibility but also a unique opportunity, to advocate the overwhelming intellectual and artistic product that always characterized Israel. This grants us a special opportunity to serve as cultural ambassadors. Music and art in general have the power to transcend national, cultural, and political barriers. On more than one occasion in the past, artists had a strong influence on historical and social developments, and I believe we can, and should, aspire to do the same.

7) What does it mean to you to have an organization like AICF available in the art world?
For me, it is very encouraging to know there is an organization that looks after the needs of Israeli artists. Before I came to the U.S. for my studies, AICF greatly helped me through scholarships. I am very thankful that recently I’ve been able to become more involved with the organization again. I’m very encouraged by the way that AICF tries to both create a wide global network for Israeli artists and at the same time look after each one of them individually. 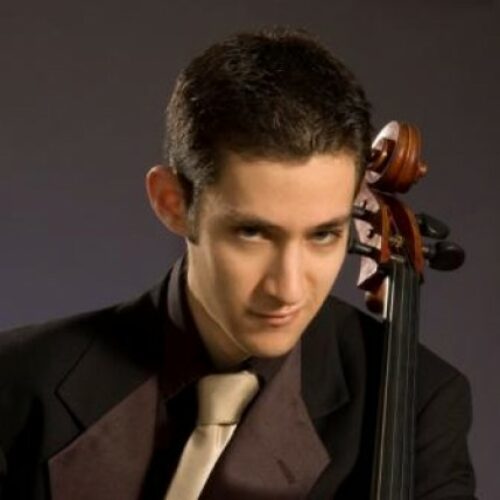