Moran Haynal was born in Budapest, spent part of his childhood in Berlin, and eventually studied in Vienna at the Academy of Fine Arts. In the early 1990s he emigrated to Israel and earned his living as a freelance artist, as well as the writing of Thora Scrolls, Mezuzot, and Ketubot. Moran Haynal currently lives in Munich. His paintings, drawings, calligraphy, and commercial art have been exhibited in several solo and group exhibitions: Vienna, Budapest, New York, Tel Aviv, Ariel, Haifa, Paris, Munich, Nurenberg, Zurich, Dachau, and Berlin. Moran Haynal is a member of the Wiener Secession, the artist association of Hungary and Israel, and the Association Internationale des Arts Plastiques (UNESCO).

1) What or who inspired you to want to be an artist?
I was about ten years old when during a game made a nice aquarelle. My interest in art started there. After graduating from high school, I studied at the Academy of Fine Arts in Vienna. Since that time I have pursued a consistent, hardworking, creative life.

2) What was your creative journey that has brought you to where you are in your career today?
Serious question: wherever I have been– Austria, Hungary, Israel, Germany–has brought new challenges, new experiences, new inspirations.

3) What do you need as an artist today?
What every artist needs: recognition and successful exhibitions, a good press, and not least of all good sales. 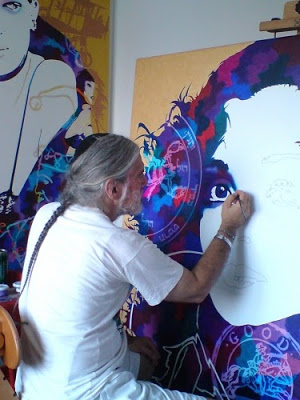 4) What creative project are you working on now?
There are two major projects. For over ten years I’ve working on a painting series with the title “Golden Age of Grotesque,” and for shorter time on Hebrew-calligraphy pictures–large-format works featuring heroic women of the Holy Scriptures.

5) Where do you see yourself and your career in 10 years?
Because I´m not a clairvoyant, I do not know what will happen in ten years, but I hope to create many, many first-class pictures, and to achieve more and more successes.

6) What does it mean to you to be an Israeli artist?
It’s not just that I´m an Israeli citizen, but that my work has as its context profound Jewish culture. In my art I try combat the prejudices against Judaism and Israel.

7) What does it mean to you to have an organization like AICF available in the art world?
The AICF does so much in the art world, because every artist needs support, help to prevail, positive advertising, and a trusting background. 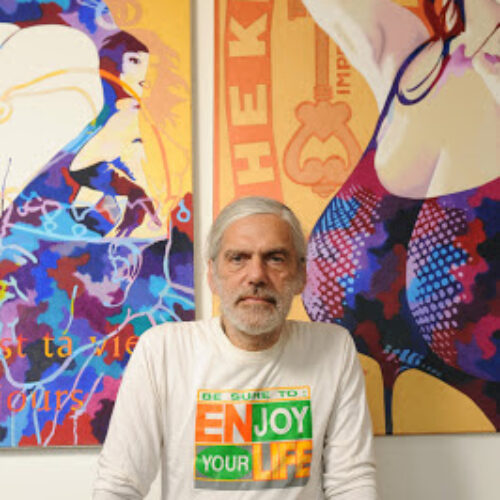