Nadav Peled picked up the guitar at age 11 and has been devoted ever since to honing his craft and creating music. After showing his early talents on classical guitar, Nadav was fascinated with rock music and switched to the electric guitar at the age of 14. By the age of 17 he had already recorded a progressive rock album that was hailed by the genre’s connoisseurs, played at the “Barby” Club, Israel’s biggest rock music venue, participated in MATAN workshop- a jazz camp for select young musicians and has received numerous scholarships including two from Berklee College of Music (Boston).

Deciding on Jazz as a main musical interest at age 19, Nadav received a scholarship to attend the New School for Jazz and Contemporary Music (NYC) and moved to New York where he had the chance to study with such notable musicians as- Junior Mance, Peter Bernstein, Charli Persip, and Jack Wilkins among others and performed at famous clubs such as- Sweet Rhythm and Fat Cat.

During a brief hiatus in his native country of Israel he has received the America-Israel Culture Fund’s “Excellence in Jazz Guitar” award, played with top Israeli musicians such as Yuval Cohen (3 Cohens) and Erez Barnoy as well as versing himself with other musical styles including Reggae, Funk and Ethiopian music. Nadav collaborated with Reggae super group- Zvuloon Dub System with which he has performed in nearly every venue/festival in Israel and also toured Cyprus. He was also the musical arranger for Beit Avi-Chai “Siged” celebration of Ethiopian music and culture commissioned by the Jerusalem Municipality.

Nowadays, Nadav is back in NYC playing with some of the best musicians on the scene today and working on his debut album.

1) What or who inspired you to want to be an artist?
As a kid my dad showed me a few chords on the guitar. I remember that being able to play something when I just started out really made me happy, it just made me want to keep going. When I was 14 years old my neighbor gave me a  Jimi Hendrix CD and it totally blew my mind. I couldn’t stop listening to it. Shortly after that I got into checking out Charlie Parker and felt the same way. Both of these artists had freedom in their music that I really related to and wanted to emulate.

2) What was your creative journey that has brought you to where you are in your career today?
I came up playing mostly rock music and gradually got turned on to Jazz in high school by various teachers. I used to play with my friends every day after school for hours an experience that led to my first recording of a full length album. At age 15, as my interest in Jazz grew stronger, I was lucky to be selected to participate in the MATAN program for aspiring young Jazz musicians. The inspiring and creative atmosphere increased my desire to grow as an artist. After that the idea of moving to New York and playing music became my goal. At age 19 I got a scholarship to study at the New School for Jazz and Contemporary Music in NYC and had the opportunity to study and play with some of my idols such as: Barry Harris, Peter Bernstein and Junior Mance.

However, after years of listening and studying Jazz music exclusively, touring with Reggae band Zvuloon Dub System led me to discover a deep passion for African music, most notably from Ethiopia. It was a great period to be working with Ester Rada, an outstanding singer,  who was exploring her own Ethiopian heritage in her work. Delving into Ethiopian music created my current project – LIONS.

3) What do you need as an artist today?
I think the most honest answer I could give to this question is time and money, both are not the easiest to get when you live in NYC.

4) What creative project are you working on now?
My main project these days is my band LIONS. It’s a 7 piece band comprised of some of my favorite New York City musicians. We play Ethiopian music from the 60’s-70’s and my original music. We are currently working on our debut EP which will be recorded in November.

5) Where do you see yourself and your career in 10 years?
In 10 years I’d like to see my band headlining major festivals around the world. I would also like to continue working as a sideman in various groups and hopefully play with more people who I admire.

6) What does it mean to you to be an Israeli artist?
I’ve had great support from my Israeli friends and colleagues and the Israeli community in my time in NY for which I’m very grateful.

7) What does it mean to you to have an organization like AICF supporting Israeli culture in the past 75 years?
I’m very happy that the AICF has been a reliable source of continuous support of culture in Israel. It is, as we all know, a very troubled part of the world. As a result, arts and culture tend to take a back seat in public and official interest. AICF’s support of culture helps bring creation and art back into public awareness which will help generate a people that respects its own and other cultures. 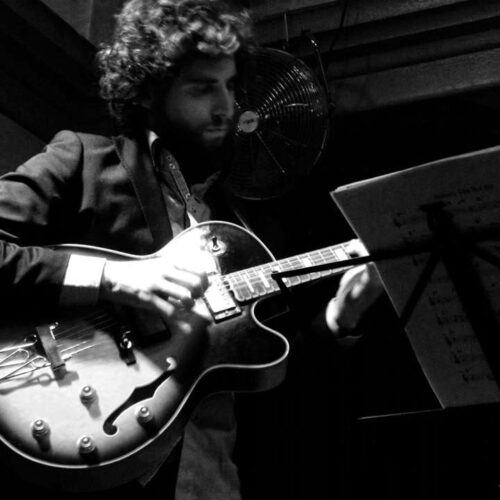