“If someone asked me: what is the film about, I would have to say: It is really about the essence of human life! I find it incredibly beautiful! It is really a moving experience … I think it is obviously art  built and master full …” (Prof. Howard Davis, University of Oregon, on my film And the alley she whitewashed in light blue)

At a time of existential threat to the physical and human environment we live in, architect and filmmaker Nili Portugali takes the readers through a poetic text and spectacular photo gallery, extracted from her awarded new film, into a deeply intimate journey of memories in the Galilean Kabbala holy city of Tsefat.

A childhood journey that unfolds gradually from her present holistic/Buddhist/phenomenological point of view to a discovery of profound universal insights of what is the secret of all those timeless places endowed with beauty and soul where one feels “at home”? And what is that »one pure art of making” that creates them? At any culture at any place and at any time.

Nili Portugali unfolds the way in which her holistic-phenomenological approach to the arts as a whole and to architecture in particular generated her creative process in making her film. A process fundamentally different from the common production processes in the film industry.

The book includes a free streaming access to watch the film.  Nili Portugali, a seventh-generation descendant of a family living in the city of Tsefat, is a practicing architect, lecturer, researcher, author and filmmaker. Her work focuses on both practice and theory, closely connected to the holistic-phenomenological school of thought. Her first book The Act of Creation and the Spirit of a Place. A Holistic-Phenomenological Approach to Architecture was nominated for The RIBA International Book Award 2007: “There is no other book quite like this one, it really is singular and worthy of your close attention.” Her film is the third chapter in her creative trilogy following the buildings she designed and the books she wrote. She did post-graduate studies in architecture and Buddhism at the University of California in Berkeley and participated there in research with Christopher Alexander at the Center for Environmental Structure. She taught at the Bezalel Academy of Art and Design in Jerusalem and at the Technion Institute of Technology in Haifa. 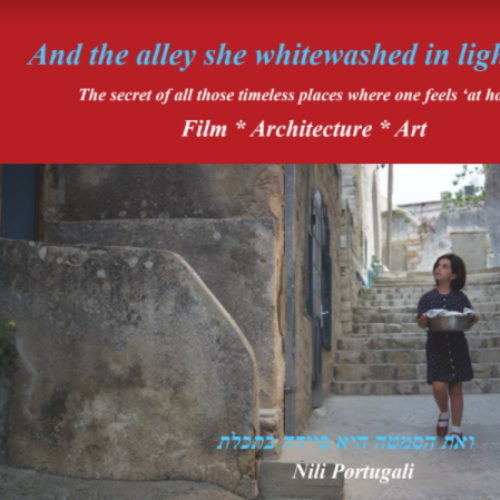