Preeminent Israeli photographer Nino Herman said that he owes his career to polio, which he contracted in 1954, when he was only 2.

Although he had a limp as a child, he didn’t sense that he differed very much from anyone else — and he thought that others felt the same way about him.

“I didn’t feel any difficulties [growing up],” Herman said in an interview prior to the opening of his one-man exhibition “BaMakom (In the Place)” at the Peninsula JCC. “I could bike and run … The spirit is stronger than the body.”

But the Israel Defense Forces didn’t agree. Because of his condition, he was exempted from mandatory military service, which was a blow to Herman, who wanted to serve along with his peers.

“I had to find a way to experience what my friends in the army were doing,” he said.

So at 17, Herman hatched a plan: quit school; apprentice himself to esteemed photographer Ephraim Kidron; and take and sell enough pictures to Israeli newspapers to earn a press card that would allow him access to military bases.

“I had a press card in one year,” Herman recounted, and “I was accompanying the soldiers [on their missions].”

Since then, Herman has accompanied more than soldiers, documenting the lives of Israelis both ordinary and extraordinary. As a photographer for Israel’s Government Press Office and Ma’ariv newspaper, he has captured almost all of the country’s public officials, including former prime ministers Menachem Begin, Shimon Peres and Yitzhak Rabin, and current Prime Minister Benjamin Netanyahu, in public photo ops as well as in quieter, more private moments. In one of his most famous images, Begin sits with a grieving Jehan Sadat following the 1981 assassination of her husband, President Anwar Sadat of Egypt.

“The picture of Begin and Jehan depicts the humanity of a leader, typically relied upon to be a highly exposed figure but privy to many moments which are not exposed to public scrutiny, and despite the enormous burden that he shoulders, he displays compassion,” Herman told Ma’ariv in 2009, recalling his trip to Cairo with the Israeli delegation.

In another image, Herman focused his lens on Peres, the former president and two-time prime minister, as he enjoyed a solitary swim in Lake Kinneret, the Sea of Galilee.

There is something magical and poetic, Herman said, in showing people in the “small, tiny, human moments of the day … I really believe that there is nothing greater than everyday life filled with love for others. There is so much good in the people that we don’t [often] see in the daily drama.”

Following two personal setbacks — a road accident in 2000 that killed one of his three children, 20-year-old son Yair (a budding IDF photographer), and his own physical injuries sustained in falls — Herman became more committed in his photography to seizing upon the beauty found in the quotidian.

In one of his current projects, the photographer explores daily street life in Florentine, one of the grittiest, southernmost neighborhoods of Tel Aviv, turning his camera on shop owners, habitués of an LGBT coffeehouse, couples stealing a kiss, friends schmoozing on a graffiti-strewn street and other random, spontaneous moments.

In these pictures, many of which are included among the four dozen at the exhibit in Foster City, viewers will see Israel in all of its multiethnic, multiracial complexity: Jews and Arabs and Christians, people of European, African and Asian descent.

“Every person, from every walk of life, is given equal footing” in Herman’s work, said PJCC cultural arts director Kimberly Gordon. “Everyone is a star of his own show” in each picture.

The photographer has begun another experiment: shooting images of rainy tableaux from indoors or inside a car. These pictures have a lush, impressionistic quality, which, Herman said, was precisely the point.

“I wanted to see how to bring a picture close to a painting,” said Herman, 66, who grew up in Ramat Gan, the son of an artist mother who survived the Holocaust and a father who founded a kibbutz.

While Herman has exhibited work many times in his home country, the show at the PJCC, which runs through May 23, is only his second in the United States — and the first on the West Coast.

Gordon said she had been thinking about how the PJCC the might celebrate Israel’s 70th birthday when she received an email from Dana Blecher, the Bay Area-based director of cultural affairs at Israel’s Ministry of Foreign Affairs, who proposed that the PJCC showcase Herman’s work.

“He is an esteemed, accomplished photographer,” Gordon said, “so we jumped on it.”

Herman, who is flying in from Israel for the show, will speak about his work at a free gallery reception on Tuesday, March 27. The reception begins at 5:45 p.m., with the photographer delivering his remarks at 7 p.m.

Unframed copies of Herman’s work, priced at $400 to $450, will be available for purchase. Proceeds will go in part toward art and cultural programming at the PJCC.

“Bamakom: The Photography of Nino Herman” runs through May 23 at the PJCC, 800 Foster City Blvd., Foster City. Gallery is open daily.

As published in The Jewish News of Northern California 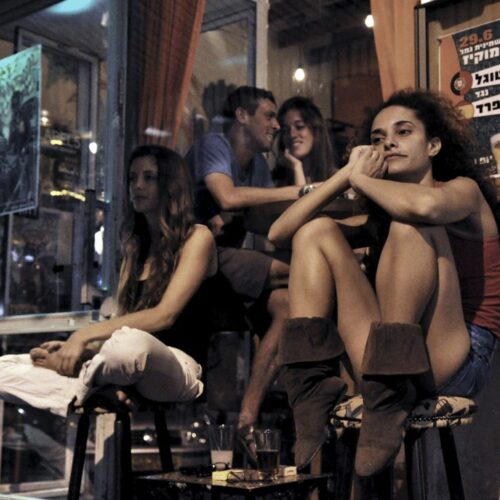