Omer Gutholtz was born in Israel in 1980. He began learning to play the guitar at age 12 on his own and was influenced by rock and blues music and Israeli musicians, such as Sasha Argov, Mati Caspi, Yoni Rechter, and others. From there, the path to jazz playing was inevitable. After completing his military service he studied jazz guitar in the USA. Among his teachers were Amit Golan, Saul Rubin, and Oren Frank. In 2009 he studied multi-disciplinary composition at the Jerusalem Rubin Academy for Music and Dance: Harmony and counterpoint with Rafi Kadishzon, Jazz Arrangement with Alon Yavnai, Jazz Guitar with Steve Peskoff, as well as piano playing.

He is the recipient of a full scholarship for studies of jazz and light music at the Berkley College of Music in the USA. In 2010, with the financial support from the Culture Directorate at the Ministry of Science, Culture and Sports, the album City Sounds was released, a joint venture with the Northern Five Project, which he leads. He also heads the Omer Gutholtz Guitar Trio. He has collaborated with a variety of jazz ensembles, from duets, trios, quartets, quintets, to septets, with whom he has performed concerts in jazz clubs all over the country, some of which were recorded. He is also a founding member of the Ornoy/Gutholtz Collaboration that includes flutist Avichai Ornoy, drummer Rea Bar-Ness, and double bass player Max Olearchik.

Omer has been teaching guitar playing for the last 10 years and his students are successful in jazz departments in high schools and universities abroad.

1) What or who inspired you to want to be an artist?
Actually, I don’t see myself as an artist. I play guitar and write music. I find it hard to understand what the true meaning of being an artist is, but it is clear to me what the meaning of playing and writing music is. I started to play guitar when I was 12 years old. My little brother had a toy guitar with one string. I took the guitar and for my surprise I managed to play the famous riff from “Smoke on the Water.” I was so excited that I could do that and I believe that from that moment I knew I wanted to play guitar. The moment I got my first guitar I started writing music. Since then I’ve been playing and writing music. Some will call it art.

2) What was your creative journey that has brought you to where you are in your career today?
The first years I played I didn’t have any formal education. I taught myself how to play guitar. At the beginning I played rock music. As I grew up, I investigated more and more about the guitar and I felt that rock music was not wide enough. During this period I came back to the music in which I grew up as a kid–Israeli musicians like Matty Caspi and Yoni Rechter. I developed my understanding of music and my guitar playing skills.  Yet, I didn’t know anything about jazz. Only when I got to NY and was exposed to city’s jazz scene did I realize that anything I loved in music I could find in jazz–groove, freedom, sound, intelligence, deep harmony. From that moment I focused on investigating, playing, and writing jazz.

3) What do you need as an artist today?
To be honest, I don’t need anything. The beautiful part in making art is that you need only your brain, and maybe some free time. Yet, as a jazz musician I play with others and my progression and creation depends on them. I think that what I need is for the Israeli jazz scene to continue to grow and to be present all over the country and that more and more musicians as well as listeners will be linked to that music.

4) What creative project are you working on now?
These days, with my good friend and significant flute player, Avichay Ornoy, I am leading a new jazz quartet. We play original music that we both write and arrange. Together we are trying to find our unique sound as a band but also as individuals.  I’m very exciting about this project and truly believe in it.

5) Where do you see yourself and your career in 10 years?
I hope that I’ll continue to write and play music. My plan is keeping on improving my playing skills to the highest level I can get, and keep on making original music. I believe that if I focus on that, the rest will come.

6) What does it mean to you to be an Israeli artist?
I believe that music is ultimately beyond your origin.  There is no doubt that my music is reflection of who I am and what molds me. I am an Israeli; I grew up here and was influenced by the Israeli music and culture. Yet, I’m a jazz musician, playing American music.  Still, when I write my music, or even when I improvise traditional zazz, my Israeli sources are significant.

7) What does it mean to you to have an organization like AICF available in the art world?
This is an amazing foundation, one that values creation above all. The support and guidance of AICF makes it possible for Israelis to create their art and then reach out to the world. It’s so common to worry about Israeli politics; sometimes it seems like that is what Israel is all about. The AICF helps us, in the crazy Israeli reality, to focus on normal things like music. 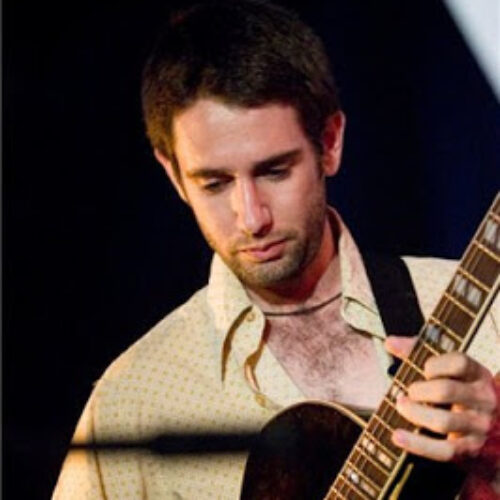