The ribbon-cutting for a new Zigi Ben-Haim sculpture, “Treasure the Green,” will take place August 9th at 11:30 am at the bus station at Broadway and Grand street in New York City.

In partnership with the NYC Department of Transportation’s Art Program, the SoHo Broadway Initiative and SoHo-based artist Zigi Ben-Haim present Treasure the Green, a site-responsive temporary art installation located on the bus bulb at Broadway between Howard Street and Grand Street in Manhattan.

Fabricated in a studio just around the corner from the exhibition site, “Treasure the Green” was inspired by the artist’s experiences living in SoHo for over 40 years. While raising his son in SoHo, Ben-Haim realized how little green space there was in the neighborhood. The leaf held by the silhouette in “Treasure the Green” symbolizes nature, and paired with the context of the neighborhood, makes a statement on the absence of nature in SoHo. For the past 30 years, the leaf has been a symbol in Ben-Haim’s work as a reminder to the public of the importance of nature in everyday life. The sculpture will remain installed for 11 months.

About Zigi Ben-Haim
Zigi Ben-Haim was born in Baghdad, Iraq, and Fled to Israel via Iran at the age of 5.
In 1970 Zigi graduated from the Avni Institute of Fine Arts, Tel-Aviv. With a grant from the America-Israel Cultural Foundation, he studied at San Francisco State University where he earned a master’s degree in Fine Arts. Zigi’s multi-cultural background has become the footprints of identity throughout his work. Zigi utilizes various materials such as discarded papers and images from his surroundings to express his ideas. 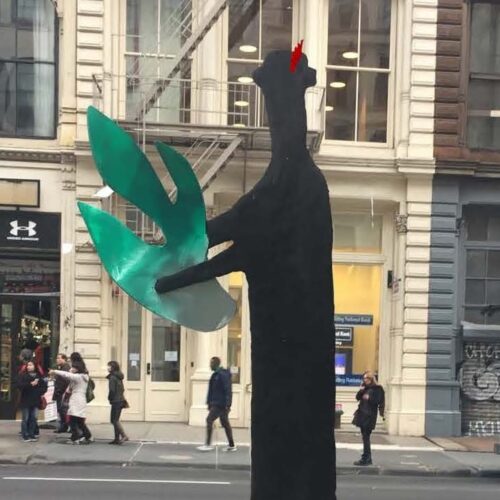