Tali Roth has been hailed by Classical Guitar magazine as “an extraordinary solo and chamber musician” by The NY Times as “a marvelous classical Guitarist”. Since her Carnegie Hall debut with the Juilliard Orchestra, she has performed as a soloist throughout the United States, Europe, Latin America, and her native Israel. Her recent engagement includes recording all Classical Guitar tracks for the Woody Allen film You Will Meet A Tall Dark Stranger that has been released in 2010. AICF had the opportunity to chat with Tali and learn more about her.

1) What or who inspired you to want to be an artist?
I have fell in love with music and the classical guitar at the age of 8 and a half after receiving a gift – a record of legendary guitarist Julian bream. I said to my mom, “ I have to learn classical guitar.” She took me to the local conservatoire than they checked my talent and decided that even though they usually start with children at age 11, it was ok for me to start.

2) What was your creative journey that has brought you to where you are in your career today?
I started folk guitar accompanying myself singing for one year than Brazilian folk guitar classics of Jobim and Baden Powell for another year with a Brazilian teacher. He then decided to become religious and I remember came to my parents home to announce that with great sorrow he has to stop teaching me as he can no longer teach female students. I was transferred to a classical teacher at the age of 12 and started improving my skills. I loved the classical guitar retrofire. I decided to change teachers in my late teens. I remember my performances and audition for AICF; it gave me such encouragement and improved my confidence. I won the Israeli national guitar competition at age 17 and kept playing the classical guitar during my army service. It was a challenge to keep it up. I remember being very motivated — getting up at 5am practicing for an hour than going to the army service. I than continued my studies at the Jerusalem Academy, the Julliard School and the Cologne music academy to finish my Bachelor and Masters of music while also winning competitions and performing concerts.  I did in classical Guitar magazine about the Woody Allen Film “You will meet a Tall dark Stranger” played the sound track of.

3) What do you need as an artist today?
As an artist I need to pursue my passion of performing and teaching while of course making a decent living.

4) What creative project are you working on now?
I am working on a new DVD: Flute and Guitar Duo Tali Roth with Grammy Nominee flutist Carol Wincenc. It will be released in the spring with exciting new arrangements of Piazzolla, Bonfa, J.S.Bach, Ravel Gossec and more. I have just released a new version of my album Tango Nuevo as well, which is available on ALLEGRO.

5) Where do you see yourself and your career in 10 years?
In 10 years I would like to do exactly what I do now just more of it; more performing, recording and of course teaching, a great passion of mine. I am happy and proud of my guitar program and my students at the Juilliard Pre-College division. We have 9 students this year and a great guitar ensemble, which I coach weekly. They are all devoted and motivated. I also love my private studio. I tell all my students that I try to treat them with the same serious approach regardless of age…

6) What does it mean to you to be an Israeli artist?
I see myself as an artist regardless of gender or nationality, but of course as an Israeli I would only presume to bring joy though music when I play in diplomatic events for the NYC Israeli Consulate, and The United Nations.

7) What does it mean to you to have an organization like AICF available in the art world?
I think AICF has a great role in helping emerging Israeli artistic talents to pursue a career in the states. 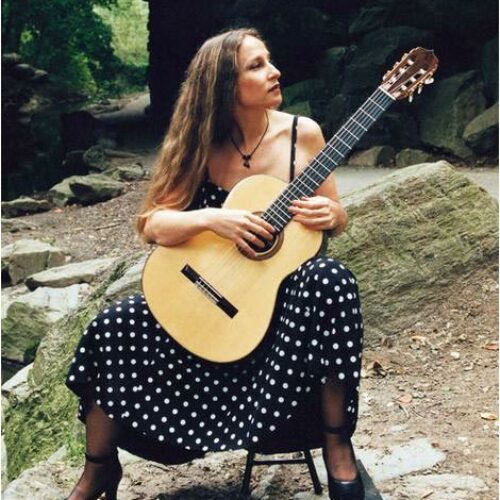