The Jewish Journal Coverage of The 2022 AICF Awards Gala

"For over 83 years, AICF has supported more than 18,000 Israeli artists and institutions including Itzhak Perlman and the Israel Philharmonic Orchestra" - The Jewish Journal

“Ah but in such an ugly time, the true protest is beauty,” wrote Phil Ochs in 1967. I’m not sure even Ochs could imagine how ugly things would get in this country 50 years later, with vicious hyperpartisanship, Twitter rage-fests, and juvenile name-calling percolating through our days.

But on the night before the midterm elections, the America-Israel Cultural Foundation (AICF) offered a momentary respite for New Yorkers able to attend their Israeli Culture & Arts (ICA) award ceremony at the New-York Historical Society. Extremists on both sides would do well to take heed of the museum’s credo: “Because history matters.”

For over 83 years, AICF has supported more than 18,000 Israeli artists and institutions including Itzhak Perlman and the Israel Philharmonic Orchestra; their inaugural award ceremony was in 2019, but the pandemic lockdowns forced AICF to put the awards program on hiatus until now.

But this year’s ceremony at the Society’s exquisite Beaux-Arts building on Central Park West more than made up for the lapse. The four iconic 2022 ICA award winners are: Gal Gadot, Shira Haas (best known for playing Esty in “Unorthodox”), dancer/choreographer Ido Tadmor, and pianist Yefim Bronfman.

Throughout the evening, I was captivated by the performances of Israeli pianist/composer Guy Mintus. There’s something about his theatrical intensity, his poetic, fiery brilliance, that in many ways sums up Israeli creativity. I kept thinking: this is what we do best — we create light.

In her remarks, Iris Reff Ronen, Global CEO of AICF, talked about the group’s support of Israeli artists since 1939: funding young artists and helping them become visionary leaders in their fields. “They are true cultural ambassadors for the State of Israel and help to shine a light on Israel as a global hub for the arts and culture,” she said.

The artists supported by AICF have appeared globally with prominent orchestras, symphonies, dance and opera companies, in museums, galleries, jazz clubs and concert halls. During COVID, the AICF created a $2 million relief fund for Israeli artists.

“The relationship between Israel and the U.S. has its challenges,” said Asaf Zamir, the Consul General of Israel in New York. “Israel is a complex place with a complex story. But I’ve seen firsthand how people suddenly view Israel differently through watching a TV show or a movie or seeing a concert.”

Haas lauded “the amazing talent we have in this very tiny country … in a world [where] sometimes, the value of art and culture can be left behind.” When asked for advice for young artists, Haas said: “Keep the creativity and fire alive. It’s a combination of passion and compassion.”

Gadot accepted her award remotely: “Now more than ever it’s important that we stand strong as a community and be proud of who we are and in our heritage.”

Ido Tadmor has been the “Ambassador of Dance of Israel” for four decades, a government-bestowed honorific. In his acceptance speech, Tadmor made a much needed distinction between art and social media: “It’s great to be honored for performances on stage, not on social media, where everything can be filtered, changed.”

Indeed, art is in many ways the polar opposite of today’s all-consuming social media. The former stems from the soul; the latter too often from hate and conformity. Hate can never lead to art, just as it can never lead to hope.

But what’s clear is that art is precisely the antidote we need right now: to nourish our souls, transcend differences, and provide us with some semblance of hope. And in many ways, Israeli artists — raised in a cauldron of both light and hate — have a sacred mission: to use their gifts to inspire the best within us, to help us push through this very ugly moment in time.

At its best, art is indeed a form of prayer. The evening ended with a performance of Arik Einstein’s “Ani Ve’ata”: “You and I will change the world.” 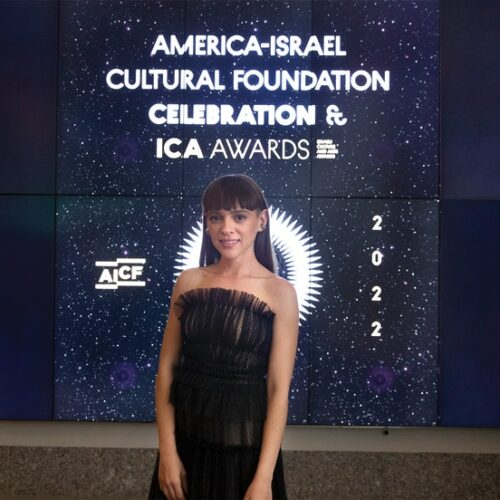