Yotam Baruch served as the cellist of the Israel Contemporary String Quartet and as assistant principal cellist of the Jerusalem Symphony. Born in Tel-Aviv, Yotam made his Carnegie Hall debut in 2007 with pianist Efi Hackmey. He also performed at the Terrace Theater of the Kennedy Center, and the Phillips Collection in DC and in NYC’s Symphony Space. Mr. Baruch received his early education at the Tel Aviv Conservatory of Music and at the Thelma Yellin High School of the Arts.

At the age of eighteen, he was appointed cellist of the Israeli Defense Force Quartet. Mr. Baruch studied at the Tel Aviv University, The Peabody Conservatory in Baltimore with cellist Amit Peled, and at Indiana University, with master cellist and teacher Janos Starker. Mr. Baruch has participated in several festivals, including “[email protected]”, “Musicorda”, “Santa-Fe Chamber Music Festival”, “The Perlman Chamber Music Workshop at the Perlman Program”, and the “West-Eastern Divan Workshop”, where he played under the baton of Maestro Daniel Barenboim. Mr. Baruch recorded for the “Voice of Music” radio channel in Israel and WFIU radio of Indiana. He collaborated in chamber music with violinists Itzhak Perlman and Joshua Bell, clarinetist David Krakauer, cellists Laurence Lesser, Paul Katz, and vocalist Bobby McFerrin.

Mr. Baruch has been a recipient of scholarship support from the America-Israel Cultural Foundation since 1995. He was the first prize winner of both the 2005 the Baltimore Music Club competition in Towson, Maryland and the 2009 Matinee Musicale Competition in Indianapolis and received several grants from IU Jacobs School of Music, including the Eva Heinitz Cello Scholarship. Recently, he was honored with the Hatfield Merit Award by the National Society of Art and Letters.  Mr. Baruch plays on a rare Italian instrument, made available for him by the Vincze family of Israel.

1)What or who inspired you to want to be an artist?
I have been infatuated with music from the moment I can remember myself. My older brother was a very gifted guitarist. One of my first meaningful musical memories was hearing him play Bach on the guitar. When I was almost six years old, my parents sent me to rhythm-music classes in the Tel-Aviv Conservatory, and since then things just rolled. The longer I live the more I love music.

2) What was your creative journey that has brought you to where you are in your career today?
From a very young age, thanks to both the Tel-Aviv Conservatory and to the AICF, I started playing chamber music, studying with violist Peter Kamnitser of the Lassalle Quartet as well as with David Chen of the Jerusalem Academy. After completing my military service in the official IDF string quartet I continued to study in the US: first with Amit Peled, and later with the legendary cellist Janos Starker. I had a wonderful time studying in the US. I was lucky enough to perform in the major venues of the east coast – namely Carnegie Hall and the Kennedy Center – and to collaborate in chamber music with Itzhak Perlman, Joshua Bell, and others. I also got a taste of the music scene outside of Israel, which was naturally very different from what I was used to. I also became interested in music theory, and have been writing a doctoral dissertation about the Mozart String Quintet. After six wonderful years, homesick, I decided, almost spontaneously, to go back home to Tel-Aviv where I am based right now. Despite the obvious difficulties of being a musician in Israel, I am happy where I am. I have been trying to combine my concert schedule abroad with performing and teaching in Israel.

3) What do you need as an artist today?
Israeli musicians are in need of financial frameworks that would allow them to make a living in Israel, without having to sacrifice every bit of their time in order to simply survive. Unfortunately, government funding for the arts and specifically for music is shamefully small. Orchestras struggle and individuals struggle even more. In a country in which every comedian is an “Artist”, every pop-singer is a “Musician”, and what I do is “Classie”, true art has very small chance. Unfortunately, due to our endless state of war, we are under a constant danger of becoming Spartan, excessively militaristic, and culturally lean. The AICF funds replace the lack of government funds. They play a major role in preserving the ‘sanity’ of Israeli society and the future of its cultural life.  Personally, I am very grateful for the support that I have received from the AICF.

4) What creative projects are you working on now?
In the last couple of years, together with pianist Inbar Rothschild, I have been working on a chamber music series called “The Chamber Concerto Club”. We attempt to bring back the tradition of the 19th century salon, reviving programs in the spirit of Beethoven’s programs, meaning – we include many small pieces, and movements of different pieces and styles, alongside performances of concertos in chamber setting. We are also conducting concerts for kids in the Bet-Ariella library in Tel-Aviv, where we combine storytelling of folk tales with related chamber music masterpieces. Aside from the above I am working on recording a few pieces that I had commissioned from young Israeli composers.

5) Where do you see yourself and your career in 10 years?
In ten years I will hopefully be doing what I enjoy doing the most – performing music. I also plan to be more involved with education.

6) What does it mean to you to be an Israeli artist?
To be an Israeli artist means to identify oneself as Israeli and Zionist. For most classical musicians, living in Israel is a huge sacrifice in terms of one’s career. The only way for Israeli chamber musicians to make a living in Israel is to create their own opportunities. In contrast to artists in other parts of the world, a great chunk of their time is spent on ‘business development’ – rather than on sheer practice. It is absolutely necessary to spend a lot of time and efforts on trying to find new audiences, as well as on marketing, etc. From my humble experience, in other countries, where the music scene is larger and more developed, creating the platform is not the work of the artist himself. The artist has to find the opportunities, rather than invent them. From my point of view, my generation of artists has a huge role to continue cultivating new audiences and setting the ground for art to flourish in Israel in the future. 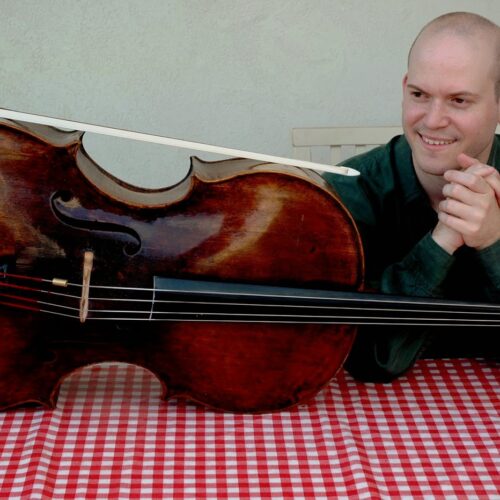