Amir Bar-Akiva was Born and raised in the Village of Gizo, between Jerusalem and Tel Aviv, Israel. It was apparent from a young age that Amir was poised to have a musical life. He was accepted to the prestigious Jerusalem Academy High School for Music and Dance in 2009. It was there that he began to hone his craft on the drum set, and where he met many of his musical peers, that he continues to work with to this day. Later, Amir was attending the Israel Conservatory of Music in Tel-Aviv on a scholarship, at age of 18.

Amir has been performing regularly with multiple projects in a variety of genres all across Israel such as Amit Friedman, Hadar Noiberg, Tal Gamlieli, Dayna Stephens, Chano Domingues, at some of the most acclaimed venues: The Red Sea Jazz Festival, Tel – Aviv Jazz Festival, Yearot Menashe Festival, Zappa Tel – Aviv, The Yellow Submarine, Shablul Jazz Club and more. Amir took part in a multitude of international performances as well – in Panama, the USA, Bulgaria, Cyprus Greece, Belgium, France, Austria, Czech Republic, England, Russia, Finland, Brazil, Spain and Colombia, with the artists mentioned above.

Amir received awards from various foundations for his excellent musicianship. He won scholarships from the Amitai Roken Foundation, the America – Israel Cultural Foundation, and from the Israel Conservatory of Music. In 2017, he was accepted into the New School for Jazz and Contemporary Music in New York City. In The New School, attending with the honor of a full scholarship, Amir has studied with some of New York’s top musicians such as Hal Galper, Reggie Workman, Ari Hoenig, Kendrick Scott, Eric McPhearson, and has continued to work on his compositional concepts that he performs regularly with throughout the city. Amir continues to reach higher and higher points of success.

In 2018, he recorded and toured the world with flutist and composer Hadar Noiberg. Her trio, which Amir is an essential part of, experiments with Israeli traditional music, hymns, and Latin rhythms, all based on the harmonic language of modern jazz. Furthermore, Amir has also recorded with Israeli singer songwriter Idan Abrahamson, and Israeli bassist, composer, and renowned educator Tal Gamlieli. His project, featuring Dayna Stephens, has performed in festivals and venues in Europe (‘A Love Supreme’ jazz festival), Israel(‘International Showcase’ festival, ‘Tel – Aviv Jazz Festival’), and many venues in New York such as Smalls, Joe’s Pub, and more.

In addition, he has collaborated with renowned, Grammy award pianist Chano Domigues, exploring the Latin rhythms that coincide with the harmonic language and melodical expression of neo-classical and modern jazz. Amir holds the knowledge that was passed down onto him as a great privilege, and he is determined on spreading his knowledge as a teacher and educator, as well as a touring musician. It will be exciting to see where Amir’s hard work, perseverance, and talent will take him next! 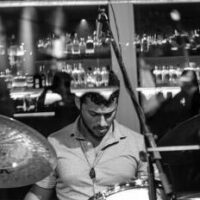