Named as one of the “gifted young violinists who are among the vanguard leading the march of violin art into the 21st century” by Henry Roth in his book entitled “Violin Virtuosos from Paganini to the 21st Century”, Anat Malkin Almani began her violin studies at the age of five with her father, Professor Isaac Malkin. By the age of six, she was already performing as soloist with symphony orchestras. At ten, she embarked on her first world tour, comprised of recitals and performances with orchestras, throughout Norway, Mexico and the United States.

She made her Carnegie Hall debut at the age of sixteen under the baton of Alexander Schneider. Additional performances, both with orchestra and in recital, have taken her throughout Argentina, France, Germany, Holland, Israel, Italy, Russia, South Korea, Spain, Switzerland, the United Kingdom and the United States. Highlights for the 2013-2014 season include performances of Mozart Concerto No.3 with the Orquesta Filarmonica de Bogota in Colombia.

Ms. Almani has been featured on the McGraw Hill Young Artists Showcase hosted by Robert Sherman, broadcast over New York radio. She was featured in a 60-minute television interview on globally broadcasted Russian Television International, as well as having appeared in features on CBS and Israeli television. Multiple performances have also been broadcast live on South American television, as well as over Israeli radio.

An avid chamber musician, Ms. Almani performs annually with distinguished musicians David Geber, Mikhail Kopelman and Julia Lichten, as part of the Academy of Music Festival in Nyack, New York. She has also collaborated with other well-known artists such as Emanuel Borok, Nicholas Mann, Peter Winograd and the Aviv Quartet.

Ms. Almani performs regularly with her sister, violinist Bracha Malkin, as part of The Malkin Duo. The Duo is a prizewinner of the Artist International Auditions and the Trinity Concert Series Auditions. They made their debut as a duo in Carnegie Hall’s Weill Recital Hall. To critical acclaim, the sisters have given recitals in Argentina, Colombia, Israel, Italy, Uruguay and throughout the United States. The Duo has performed numerous recitals at Weill Recital Hall, has given the world-premiere of David Ward-Steinman’s Concerto for Two Violins in San Diego and has appeared as soloists with orchestras worldwide, including the Orquesta Filarmonica de Bogota. 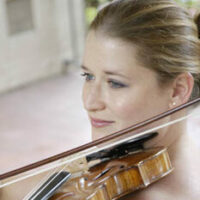