Born in the former Soviet Union in 1984, Berenika Glixman immigrated to Israel in 1991. There she won several national and international awards, among them first prizes at the Young Artist Competition held by Israeli Radio and the Jerusalem Symphony Orchestra (2009), the Fort Worth International Young Pianists Competition (USA, 2008), and the Michelstadt Competition (Germany, 2008), Best Israeli Competitor Prize at the Arthur Rubinstein International Piano Master Competition, the Pnina Salzman Award at the Tel-Hai International Piano Master Classes (2010), and Third Prize, Audience Favourite Prize and an award for best performance of a twenty-first-century work at Serbia’s Isidor Bajić Memorial Piano Competition (2006). Since 1997, she has been a regular recipient of the America–Israel Cultural Foundation scholarships.
Early in her career, in February 2009, she was chosen by Zubin Mehta to perform under his conductorship at the annual gala concert at the Mann Auditorium in Tel Aviv, where she performed Prokofiev’s Piano Concerto No 2 in G minor. Mehta called Glixman ‘one of the greatest promises among the young generation of pianists nowadays’. In January 2010, with only forty-eight hours of preparation, she replaced Yuja Wang at a series of subscription concerts with the Israel Philharmonic and Ilan Volkov.

Glixman has since performed as a soloist with numerous orchestras in Israel, Europe and the USA, including the Israel Philharmonic, Fort Worth Symphony, Bucharest Symphony, Sofia Philharmonic, Jerusalem Symphony and Buchmann–Mehta School of Music Symphony orchestras. She has recorded for radio stations in Israel (IBA), Serbia (Radio Antena), Germany (hr2) and Italy (Nova Radio). 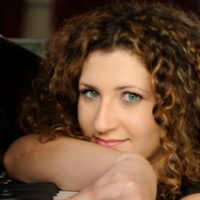