Dudu Fisher is known throughout the world for his stirring performance as Jean Valjean in the hit show “Les Miserables,” but his career began in his native country Israel many years before.

After three years of service in the Israel defense forces, Fisher studied at the Tel Aviv Academy of Music and studied privately with some of the great cantors of the previous generation. During this period he was supported by the America-Israel Cultural Foundation through the "Sharett" grant program in 1973-1981. He was only 22 when he was invited to become the Cantor of the Great Synagogue of Tel Aviv. Along with his synagogue duties, Fisher also traveled throughout the world, bringing traditional Hassidic, Yiddish and Cantorial music to new audiences. During a trip to London in 1986, he happened to see a performance of the musical “Les Miserables.” It was an event that changed his life. When word was released of the show’s forthcoming production in Hebrew, Fisher knew that he had to audition for the show. The fact that he had absolutely no experience working in the theater did not deter him for a moment. In true Broadway musical fashion, the British director of the Israeli version, Stephen Pimlot, chose the inexperienced Fisher for the lead role of Jean Valjean. The rest is history. “Les Miz” became the longest-running show in Israel and Fisher became a superstar. His stardom is not limited to Israel. In 1988 he was invited to London to take part in a royal command performance hosted by the queen of England. The performance was a special version 0f “Les Miz,” featuring artists from the many “Les Miz” productions playing around the world. From there, the play’s producer, Cameron Mackintosh, invited Fisher to play the role of Jean Valjean on Broadway and London’s West End.

The role of Jean Valjean even took him to soccer’s world cup final at Wembly stadium, where he and four other “Valjeans” were invited to sing. Although Dudu Fisher is not the first Israeli actor to achieve success in the theater and musical world, Fisher did achieve a first of a different kind. As an observant Jew, he was the first actor on Broadway and the west end to be excused from performing on Friday nights, Saturday matinees and all Jewish holidays. During his long career, Fisher has recorded thirty-eight albums. He sang the role of Moses in the Hebrew version of Stephen Spielberg’s “The Prince of Egypt.” He has sung with the Israel philharmonic orchestra, conducted by maestro Zubin Mehta, recorded an album of show tunes with the London symphony orchestra and has performed as well with the Baltimore and Queens symphony orchestras. In addition to Britain’s royal family, he has performed for the Thai Royal Family and for President and Senator Clinton. He was the first Israeli artist allowed to sing in the Soviet Union in the days before Perestroika. His concerts there were attended by thousands of Jews thirsting for Jewish culture. A particularly moving concert took place in his father’s hometown of Dubnow in the Ukraine. In the theater, Fisher has played leading roles in the productions of “The Hunchback of Notre Dame”, “Kol Nidre”, by Lalo Shifrin and Avi Koren, “Over The Rainbow”, and “Stairways to Heaven”. Fisher’s first one-man show “Never on Friday”, opened at Off-Broadway’s Jewish Repertory Theater in 1999. Lawrence Van Gelder of the New York times called the show… “A display of a vocal talent that resists confinement and is an explosion of religious faith that is reflected in the show’s title. Mr. Fisher possesses the spectrum of talent to make it work.” From January to April of 2001, Dudu Fisher was seen on Israeli stages starring in “The Rothschilds”, a musical by Jerry Bock and Sherman Yellen. Shortly after, he was presented the “Liberty Award” at the Lower East Side Festival, which celebrates contributions to Jewish culture in America. In October of 2002, Dudu again thrilled his audiences with a one-man show, “Something Old, Something New”, which was written by Richard Jay-Alexander, Dudu’s Broadway “Les Miz” director. He opened to rave reviews. Victor Gluck of backstage wrote of fisher, “The energy that Fisher radiates on stage can light a small city”. Cheryl Kupfer of the Jewish press entitled her review, “Something Old, Something New-Something Awesome”. “He might just as well have called it Something for Everyone”, wrote Lawrence Van Gelder of The New York Times. Adding to Fisher’s accomplishments are his starring role in the film “The Road to Glory”, acting as host on an Israeli television series and appearing on innumerable radio and television programs throughout the world. It is safe to say that Dudu Fisher has excelled in every aspect of his profession. He is happily married and the proud father of three children. Dudu’s fall 2004 one-man show “Dudu Fisher Coming to America” features selections from “Fiddler on the Roof”, “The Jazz Singer” and “Yentl” which recently toured in the United States. In Israel, Dudu brings back Yiddish and Klezmer music with an ongoing production for the Yiddishspiel Theater. Audiences are thrilled by his latest show, “Jerusalem”. The tour of this show began in Jerusalem and he continues to travel through the states and Europe with the production.

Fisher has recently completed filming an Emmy nominated PBS special in the valley of Beit She’an in Israel. The premier airing of the program which took place in Florida in December of 2008 was a huge success. This PBS show is being aired nationwide in 2009.

A dream come true solo performance took place in Carnegie Hall on October 25, 2009 to an enthusiastic audience. They showed their appreciation of Fisher’s talent with three standing ovations. He had to respond to the thunderous applause by appearing on stage for a second encore. This performance is part of an East Coast 2009 tour which will be followed by another tour in the winter of 2010.

From the Opera House in Sydney Australia to Madison Square Garden in New York, from the Budapest Opera House to the Bolshoi Theater in Moscow, from Singapore to Sao Paulo, Dudu Fisher spends most of the year traveling around the globe bringing joy to millions of people. 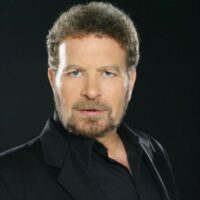