Eddy Khaimovich, an Israeli bassist extraordinaire, composer, producer and educator living in New York, has released his first album, “Andarta”, featuring multi Grammy-award winning trumpeter Roy Hargrove in 2008 to raving acclaim from critics and audiences alike. It was chosen among the Best Releases of 2008 by All About Jazz magazine and was listed on numerous other top Jazz charts. Since moving to New York in 2001 to attend the prestigious Manhattan School of Music on full scholarship, Eddy’s impeccable agility on the instrument, rock-solid rhythmic adequacy answering the rigorous demands to a contemporary bassist, warm tone, deep sound and uniquely creative musical voice have earned him a solid reputation on the New York music scene. His musical diversity, virtuoso command of both, electric and upright basses and expertise in multiple musical disciplines has led him to become an in-demand bassist in genres ranging from Classical and Jazz to World and Commercial music, as well as production and studio work.

Eddy was born in Vilnius, Lithuania (former USSR) and immigrated to Israel with his family in 1990. He began his musical training at the late age of 15, as a classical double bassist. Quickly excelling in his musical ability, Eddy had won the position of Principal Bass of the Young Israel Philharmonic soon thereafter. Before much longer, he also performed regularly with the Israel Philharmonic, Jerusalem National TV & Radio Symphony Orchestra, Israeli National Opera and many others. He had also performed solo recitals and chamber music throughout Israel and Europe, performing in such venues as The Mann Auditorium of Tel-Aviv, Israel, Berlin Philarmonie and Gewandhaus Leipzig, Germany. He has played under the baton of such conductors as Kurt Masur, Valery Gergiev, Zubin Mehta, Yuri Temirkanov, Daniel Barenboim and Lorin Maazel.

Eddy’s chamber music credits include regular performances with Neos String Quartet, The Consonance Chamber Music Ensemble, Nika Leoni Chamber Project, George Oakley, The David Glukh Chamber Ensemble and Manhattan Camerata to name a few. Eddy has also performed chamber music as a featured guest with various artists and ensembles in the NYC metropolitan area and beyond in such venues, as Carnegie Hall, Avery Fisher Hall, Meyerson Hall, Merkin Hall, New York Town Hall and Kennedy Performing Arts Center. Eddy has regularly performed with the Philharmonic Orchestra of the Americas, a musical cross-over ensemble that focused on music by composers from South and North Americas, as well as specially commissioned compositions that fuse Classical and South American folklore music. Eddy was a founding core member of the POA, always committed to exploring new musical territories and innovations.

After he started the Classical bass, Eddy progressed from Classical to Contemporary, to World music and finally, at 22, to Jazz where his multiform tastes led him to explore many types of new musical genres and disciplines as a player and a composer.

His teachers included the great Harvie S, Phil Markowitz, John Riley, among many others and of course, his long-time mentor, the world-renowned multiple Grammy winning bassist and composer John Patitucci. During each of the years 1995 to 2003, Eddy was awarded the prestigious America-Israel Cultural Foundation Grant.

Early on, Eddy played with leading Israeli Jazz artists including the Chassidic Jazz Quartet, a group that used ancient Chassidic Nigunim (chants) as a basis for free Jazz exploration led by the great late reeds-man and flutist Roman Kunsman. Eddy has appeared in a special feature of the Israeli National Broadcast on the “Kol Ha Muzika” radio channel featuring his music (2003). He also received coverage by multiple music programs on the Israeli National TV Channel “Shidurei Keshet”, Israeli National TV Channel 10 and International TV Channel RTVI. Eddy has appeared on the “Night Bird” talk show and in a live broadcast from the International Tel-Aviv Jazz Festival (2003), which has been aired since then in over thirty countries around the globe.

Eddy is also active as a composer, producer and educator. In addition to composing for his group, he has composed numerous scores for theater, films and TV, including The Bee And The City documentary (aired on PBS in 2011). Eddy Khaimovich has conducted many clinics and master classes nationally and abroad. He teaches bass locally and lectures on music history and theory at the Village Temple school music department in New York.

As a performer, Eddy has played throughout the world with his own band and as a sideman, including shows in major concert halls for numerous heads of state, such as US president George W. Bush, Mexican President Felipe Calderon, Israeli prime ministers Ehud Barak, Ariel Sharon and Benjamin Netanyahu, Russian presidents Boris Yeltsin and Vladimir Putin. 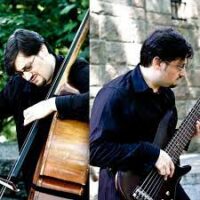