Jacques lives and works in Israel.

He develops his paintings in series, which enables him to research and to go deep into the color, the composition and the psychological nature of the human figures. The color is based on almost anti-natural, strong colors: colder blues and greens, warmer reds and yellows. In this way, he creates strong and powerful chromatic juxtapositions in balanced harmonies.

The facial features and expressions are insinuated, which allows him to delve into the psychology of my models. They are characters whose look is observing and who establish an intense contact with the viewer. 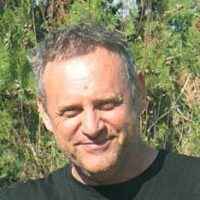