The Romanian-born Israeli violinist, Kati Debretzeni, is a fourth generation musician. She began playing the violin with Sofia Szabó in Romania. She studied at Liceul de Muzica "Sigismund Toduta" in Cluj-Napoca (August 1982-May 1986). She immigrated to Israel at the age of 15, finishing her studies with Ora Shiran in Tel-Aviv. Her passion for historical performance took her to London, where she studied the Baroque violin with Catherine Mackintosh and Walter Reiter at the Royal College of Music.

Since 1997, Kati Debretzeni has played with and since 2000 led the English Baroque Soloists under the direction of Sir John Eliot Gardiner, with whom she has performed the world over. Her playing can be heard in the group’s recordings of J.S. Bach's cantatas (recorded live during the unforgettable Bach Cantata Pilgrimage 2000), the Brandenburg Concertos (BWV 1046-1051) and the more recent live recordings of the Mass in B Minor (BWV 232), the St Matthew Passion (BWV 244) and Monteverdi’s operas on the SDG label. She continues as a co-leader of the English Baroque Soloists, and has performed a reconstructed double concerto by W.A. Mozart with pianist Robert Levin at the Salzburger Festspiele of 2006.

Since 1997, Kati Debretzeni has played eith Orchestra of the Age of Enlightenment. In 2008, she was appointed as one of their leaders, has often appeared as soloist, and has collaborated with conductors such as Frans Brüggen, Simon Rattle, Adam and Iván Fischer, William Christie, Ottavio Dantone and Vladimir Jurowski, in performances in the UK, Europe and the USA. She has directed the group from the violinist’s chair in works ranging from Baroque repertoire to L.v. Beethoven, Felix Mendelssohn and Berlioz. She has recorded Antonio Vivaldi’s Four Seasons (Signum) following performances in collaboration with the Henri Oguike Dance Company in 2013, and fused authentic performance with contemporary choreography. Also, she directed their concert with mezzo-soprano Sarah Connolly from the violin in 2017, which was an unusual, challenging and rewarding feat.

Kati Debretzeni can be heard on numerous award-winning recordings ranging from Biber to J.S. Bach and Haydn for Linn Records, Chanel Classics, Avie and SDG. Her first recording of J.S. Bach's Brandenburg Concertos (BWV 1046-1051) with Trevor Pinnock's European Brandenburg Ensemble (Avie Records) has won a Gramophone Award in 2008, and her second with the English Baroque Soloists has been recently released (SDG) to critical acclaim.

A keen chamber musician, Kati Debretzeni and is a founding member of Ricordo, specialising in the “stylus phantasticus” of the 17th c. Their debut CD of the music of H. Biber was released to critical acclaim on the Linn label. Between 2001-2006 she was a member of Florilegium, performing world-wide and recording award-winning CD's for Chanel Classics. Their latest volume of Georg Philipp Telemann's Paris Quartets was nominated for this year’s Gramaphone award. In the last decade she is a member of Trio Goya. Their recording of L.v. Beethoven’s Op. 1 Piano Trios (Chandos) has recently been released to critical acclaim.

Over the last few years, Kati Debretzeni has been invited to direct various ensembles in Israel, Canada, Norway, Poland, Iceland and the UK. She is developing as an educator, currently teaches the Baroque and Classical violin at the Koninklijk Conservatorium Den Haag (Royal Conservatory of Music in The Hague), Netherlands (since October 2004), and her former students make music the world over. She has given master-classes and courses in the UK, Germany, Italy, Norway, Canada, Israel, Hungary and the Czech Republic. She is also Artistic Adviser to the York Early Music Festival. 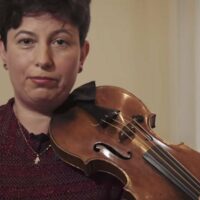