Born in Tel Aviv, Kinneret Sieradzki, made her solo debut with the Israel Philharmonic at the age of 18. She has since performed on stages throughout Europe, Canada, Japan, and Israel, including solo appearances with the Jerusalem Symphony, the Quebec Symphony, the Israel Chamber Orchestra, the Nederlandse Promenade Orkest, the Sinfonieorchester Magdeburg, “Unio Musical de Bocairent” (Spain), and “Le Violon du Roy” in Canada. She has also given important recitals at the Berliner Philharmonie, the Tel Aviv Museum of Fine Arts, and the David Oistrakh Festival in Estonia.

Ms Sieradzki was the inaugural recipient of the prestigious Huberman Scholarship of the Berlin Philharmonic, where she performed in the orchestra through the 2009-10 season, working with Sir Simon Rattle, Valery Gergiev, Gustavo Dudamel, Herbert Blomstedt and David Robertson. She has also played under Daniel Barenboim in the Staatskapelle Berlin and on tour with the West-Eastern Divan Orchestra. Ms Sieradzki is a founding member of the Nedudim Ensemble, an inter-cultural ensemble of Jewish and Arab musicians.

Ms Sieradzki graduated from Thelma Yelin High School of Arts and the Tel- Aviv Conservatory of Music, where she studied with Nava Milo for over 10 years. She continued her studies at the Music Academy of Maastricht (Holland) in the class of Prof. Robert Szreder, before completing her training in Berlin with Christophe Horak, Christian Trompler, Ulf Wallin and Michael Mücke at the Hochschule für Musik “Hanns Eisler”. Other influential mentors include Itzhak Perlman, Vadim Gluzman, Miriam Fried, Guy Braunstein and Herman Krebbers.

Winner of numerous prizes and competitions, Ms Sieradzki is an alumnus of the “American-Israel Cultural Foundation”, which supported her throughout her studies. Her recordings and performances have been broadcast on Dutch television, Deutschlandradio (Germany), Israeli national television and the Israeli classical radio channel. 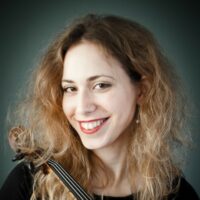