Maestro Lior Shambadal maintains an active career as music director and guest conductor throughout Europe, Asia, Israel and the Americas. He currently serves as the chief conductor of the Berlin Symphony Orchestra (Berliner Symphoniker), a post he has held since 1997. During his tenure, Maestro Shambadal has led numerous concerts at the fames Berlin Philharmonie Hall and the Konzert Haus in Berlin. He has also conducted the orchestra in hundreds of performances on tour in Japan, China, Korea, Italy, Spain, Ireland, England, France and Germany.

From 2009-2010 he was Music Director of the Orquesta Filarmónica de Bogotá (OFB), Colombia, with whom he toured in China and Italy in 2009. Maestro Shambadal was the Principal Guest Conductor of the Liepaja Symphony Orchestra in Latvia in 2008-2009 as well as Principal Guest Conductor of the Chengdu Symphony Orchestra of the Central Music Conservatory on the Sichuan province of China (2007-2009). In addition, he participated in the Festival of San Gemini in Italy.

In 2007 he appeared for seven years as a guest artist for the orchestra training program at the Banff Centre in Alberta, Canada.

From 2000-2003, Maestro Shambadal served as the Chief Conductor of the RTV Symphony Orchestra in Ljubljana, Slovenia, and toured with them in Germany, Italy, Austria and Switzerland. In 1980, Maestro Shambadal was nominated Chief conductor of the Haifa Symphony Orchestra. Later for 7 years he was music director of the Kibbutz Chamber Orchestra in Tel Aviv, with whom he regularly toured Europe. He was the founder of the ensemble Musica Nova in Tel Aviv, and led the Mendelssohn Players in Berlin.

Maestro Shambadal’s opera repertoire includes over 40 works of the German, Italian, French, Russian and English literature as well as several world premieres, including Franz Hummel’s “Gesualdo” and Magret Wolf’s “Kirisk” after a libretto by D. Aitmatow. From 1993-2000, he served as Music Director of the Pfalztheater in Kaiserslauten, Germany, where he led more then 400 performances, including the inaugural concerts of the new Opera House. He has also appeared with Ontario Opera in Canada and led opera production in Israel (New Israeli Opera and Kibbutz Chamber Orchestra Opera productions). He has undertaken several special opera projects as well, including Glinka’s “Life for the Tzar”, in collaboration with Moscow’s Bolshoi Theatre, and a new version of Rimsky-Korsakov’s “Mozart and Salieri” (with added works of the two title composers) that he arranged, conducted, staged, and designed (set and costumes).

Celibidache and Franco Ferrara. He later expanded his studies in other areas, such as electronic music and composition, under the tutelage of Witold Lutoslawski and Henri Dutilleaux (in France), and Musical Phenomenology at the Faculty of the Johannes Gutenberg University of Mainz, Germany.

A prolific composer whose musical range includes chamber music and symphonic orchestra pieces, his works have been commissioned by several orchestras, including the Israel Philharmonic and performed in many countries. 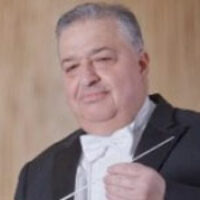