Born in 1989 in the city of Novokuznetsk, in Russia, primary and secondary education in the music school number 47 im. M. F. Matsulevich and Novokuznetsk College of arts. First lessons in composition were taken from A. A. Okuneva, and improvisation at L. E. Alexanderovsky. In 2008 became the winner of the competition Simphonicum Integre Krasnoyarsk in the Composition category.

In 2009 she entered the theory and composition faculty of the Novosibirsk State Conservatory named after M. I. Glinka. In 2013 graduated from the Conservatory with a bachelor's degree. In 2015 with a master's degree (with honors) as a composer in the class of honored art workers of RF, Professor Yu. p. and the Foundation.

During Maria's time at the Conservatory, she wrote "Two Songs For Soprano Solo" in folkstyle (special prize of the Open Siberian competition for young composers, Murov 2011), "Variations for clarinet in B and piano", "Epic for flute and string trio", Sonata for piano, Sonata for flute and cello, "Three Poems of Marina Tsvetaeva for soprano and piano", "Sacred Cantata" for mixed choir and chamber orchestra, "The Calm Of Solitude" for clarinet in B, viola, cello and piano, "Kvorum" for cello, piano and soft sticks (dedication A. Murowa), "Manjushri" for male voices, "Viole d'amour", piano and Tibetan bowl in D, "Reverse side" for voice and plastic bag, "Triptych" for Symphony orchestra, choral miniatures and electronic music.

At the end of the Conservatory Maria wrote a thesis theoretical work "The Origin of the Spectral Direction in the Class of O. Messiaen".

While studying at the Conservatory she participated in a large number of activities as a composer and improviser.

Following Maria's graduation from the Conservatory, she wrote "Suite for Children's Choir Piano" to words by Z. Mirkina, music for video project "The Liason", a musical tale of "Royal science".

Now Maya lives in Israel where she works as an actor and improviser in a playback theatre. 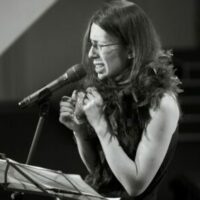