May Endy was born in 1995 in Jerusalem. He began studying the cello when he was nine with Mrs. Luba Rabin, continued his studies and earn his bachelor’s degree with Professor Hillel Zori and he currently studies for his Master’s degree at the Manhattan school of music in New York with prof. Julia Lichten .

May took part in the David Goldman program for outstanding young musicians and the Young Israel Philharmonic Orchestra of the Jerusalem Music Center where he played as first cellist. He has participated in chamber ensembles, programs and orchestral concerts and represented the center in a concert tour in London.

May served in the israeli army with the status of “outstanding musician ” and also represented the army musicians program in a concert tour in Germany. For 2 years he was a member in the “Gertler string quartet”- the representative chamber music ensemble of the Buchmann-Mehta school of music,with them he played concerts In Israel , represented the school in a concert tour in Brazil and record number of concerts to the Israeli radio. He preformed chamber music concerts with acclaimed musician’s as Shmuel Ashkenasi, Guy Braunstein, Members from the Jerusalem quartet, Jerusalem trio, the Richter quartet of the Israel philharmonic and more.

May is a member in the Perlman Music Program for outstanding strings players from all over the world, under the musical direction of violinist Itzhak Perlman. May take part in the “Musethica Foundation” , playing official concerts as well as concerts for variety of social and humanitarian organizations in Israel.

May plays on an old English cello named Tom Allen and a M.H Andersen bow, loaned to him from the America-Israel Cultural Foundation. 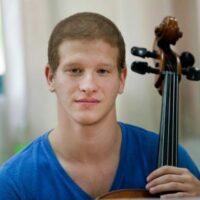