High in demand as a chamber musician, Mr. Katz has collaborated and performed with artists such as Itzhak Perlman, Midori, Donald Weilerstein, Daniel Philips, Peter Wiley, Anthony Marwood, Peter Frankl, Charles Neidich, Roger Tapping, Lucy Chapman. As the cellist of the Lysander Piano Trio, he was a winner of the 2012 Concert Artists Guild Competition, and was awarded first prizes at the 2011 Coleman Competition and 2011 J.C. Arriaga Competition. Their first album “After a Dream” was released in 2014 on CAG Records and was praised by the New York Times for its “polished and spirited interpretations.”

Deeply committed to community outreach and education, from 2014-2016 Mr. Katz was a Fellow in Carnegie Hall’s Ensemble Connect. He was previously selected to be part of a special string quartet led by Midori to present formal and outreach concerts in Myanmar and Japan as part of the 2013-2014 International Community Engagement Program, and was invited to return to the program in 2016-2017 for concerts in Nepal and Japan. Mr. Katz is a faculty member at the Csehy Summer School of Music and the Chamber Music Institute in Stamford, CT and has served as an adjunct cello professor at Nyack College from 2015-2017. 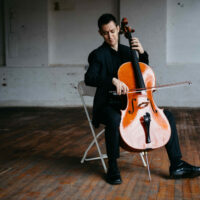