Rovner’s early work is characterized by the distortion of color and blurring of imagery. Exemplified by the series Outside (1990–91)—featured in her first major museum show Outside: Michal Rovner, Works 1987–1990, at the Tel Aviv Museum of Art in 1990—and Decoy (1991), Rovner focused on images of encampment and surveillance as a point of departure, abstracting their specificity through a process of reprinting. In 1994 Rovner’s One-Person Game Against Nature (1994) was featured in New Photography 10 at The Museum of Modern Art, New York. By the late 1990s her blurred figures coalesced into migrating crowds in dream-like worlds, using cyclical repetition and duration as a device.

In the decade to follow, Rovner’s video work (incorporated into her practice in 1992) began taking cues from expanded cinema, collaborating with composer Philip Glass in Notes (2001). She received a mid-career retrospective at the Whitney Museum of American Art, New York, in 2002, which featured her multichannel video work Time Left (2002), depicting thousands of ambiguous silhouetted figures marching to the accompanied music of Rea Mochiah. This work was presented again the following year at the Venice Biennale where she was selected to represent Israel with the multi-faceted exhibition Against Order? Against Disorder? (2003).

Rovner became fascinated with the way geological objects—especially altered with human markings—telegraph history into the present and future and began merging video with sculpture through projection, as in her exhibition In Stone (2004). Introducing site-specific and archeologically driven work into her practice, in 2006 Rovner began working with Israeli and Palestinian masons on a series of monumental structures titled Makom (Place), comprised of stones from dismantled or destroyed houses from Jerusalem, Bethlehem, Haifa, the Galilee region, and the border of Israel and Syria. In 2013, Rovner created Traces of Life, a permanent installation at the Auschwitz-Birkenau State Museum devoted to the 1.5 million Jewish children murdered in the Shoah.

Rovner reinterprets historical memory and contemporary themes through her multimedia practice, in which she employs drawing, printmaking, video, sculpture, and installation. By recording and erasing visual information, where specifics of time and place are obscured, her works become gestural, layered, and abstract reflections on the continuum of human experience. 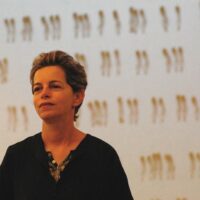