Noga was born in Israel in 2001 and has been playing the violin for 12 years. She studies her Bachelor Degree with Professor Nora Chastain at the University of Arts in Berlin, Germany.
She is a former student of Prof. Hagai Shaham and Dr. Guy Figer at the Israeli Conservatory of Music in Tel Aviv.

Noga began studying the violin at age six in the US, there she played in a children’s strings orchestra, up to age 12, winning first prize in Carnegie Hall at a National Youth Orchestras Competition in 2009.

Noga won several first and second prizes in competitions in Israel, including 1st prize at the National Violin Competition in 2013 and 1st prize at the Zefunt Tarbut summer scholarship auditions in 2016. Noga is a recipient of AICF Scholarships with distinction since 2013. In 2018 she received a scholarship for studying abroad. In 2014 Noga had her solo debut playing Bruch Concerto and Vivaldi Concerto for 4 violins with the Israel Symphony Orchestra Rishon-Letzion. In June 2015 Noga performed at the highly prestigious “Stars of Tomorrow” concerts in Austria as well as at the Crans-Montana Classics Festival in Switzerland, invited by Shlomo Mintz. In 2017 she performed at Keshet Eilon’s Gala Concert in NYC, and in August 2017, 2018 and 2019 at the closing concert of the International Summer Academy of the Vienna Music Academy. In 2018 Noga had her solo debut as a violist in Mozart’s Sinfonia Concertante alongside her brother, violinist Michael Shaham, first with the Jerusalem Symphony Orchestra at the Gala Concert for Israel’s 70th independence day and later with the Netanya Kibutzim Chamber Orchestra’s in the ‘Rising Star’ series. In November 2019 she performed with Haifa Symphony Orchestra as a soloist, playing Chausson’s Poeme. Last season Noga also played solo and chamber music works at the ‘ Spring Chamber Music Weekend of the Kfar Blum Festival, Israel, and in April 2019 she played in Orit’s Wolf concert series in Tel Aviv Museum.

Since 2012 Noga takes part in the Young Strings Unit of the Jerusalem Music Centre, as violinist and violist at the David Goldman Chamber Music Program and in the Young Israel Philharmonic Orchestra, including as its concertmaster. Since 2010, Noga participated and performed at the Keshet Eilon violin courses. In summer 2014 she participated in the National Arts Canada strings course, directed by Pinchas Zuckerman in Ottawa, Canada. In 2015 and 2016 Noga was one of the youngest participants at the Heifetz International Music Institute in Staunton Virginia, where she performed at the Heifetz Institute’s 20th anniversary gala concert with Roberto Diaz, director of the Curtis Institute.

Noga participated at the 2016 and 2018 Perlman Music Programs in Israel, and performed at the Israeli Knesset at the Genesis Award ceremony, honoring maestro Perlman. In summer 2017 she participated at the International Perlman Music Program at Shelter Island, NY, for 7 weeks with 40 other leading young musicians from all over the world. In summer 2018 Noga attended the Rheinau Young Classics Masterclasses as a violist and violinist.

Noga has been accepted to the 2020 Verbier Festival Orchestra, but due to the Coronavirus, she will attend it from summer 2021. 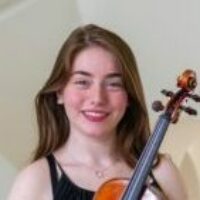