Rachel Rotenberg was born and raised in Toronto, Canada. She received her Honors BFA at the School of Visual Arts, in New York City, and York University, in Toronto. She has been creating wood sculptures continuously for the last forty years. In 1984 she moved to a studio in Williamsburg, Brooklyn. Relocating to Baltimore in 1994, she juggled financial employment, and raising her five children with her commitment to sculpture by annexing a studio beside her residence. In 2015, she moved to Israel where she is now working and exhibiting.

Her work has been exhibited in galleries in North America and Israel. Her most recent exhibits in Israel were at the Barbur Gallery, Miklat Gallery and the Van Leer Jerusalem Institute, during the Jerusalem Biennale.

In the United States and Canada Rachel exhibited for forty years including in The Baltimore Museum of Art, Creative Alliance of Baltimore, The McLean Project for the Arts, Vox Populi in Philidelphia, Hillyer Art Gallery in Washington DC, Maryland Hall for the Creative Arts in Annapolis, Marianne Boesky and Lori Bookstein Galleries in New York, Mount St. Mary’s University, Saint Joseph’s University in Philadelphia, The Washington County Museum of Art and many Baltimore area galleries. 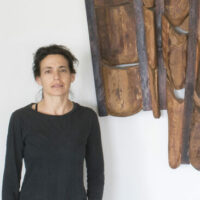