Shai Abramson was born in Jerusalem, and was exposed early on to the world of cantorial music. As a young teen, he participated in the choir of the Great Synagogue in Jerusalem (under the baton of conductor Elli Jaffe) during the High Holiday season. He gradually acquired more musical expertise and experience, studying with the best teachers in Israel, including Maestro Jaffe, Cantor Moshe Stern, Cantor Naftali Herstik & Dr. Mordechai Sobol.

In 2008, Shai Abramson was appointed Chief Cantor of the Israel Defense Forces. Abramson serves as the representative cantor of the State of Israel, and participates in this capacity in formal state occasions and ceremonies. Abramson also accompanies various government representatives to ceremonies and events in Israel and abroad. He has performed as cantor and singer under the auspices of the Knesset, the IDF, the Ministry of Defense, and various other government ministries and agencies.

Cantor Abramson performs with the most prominent cantors and musicians of our generation, and participates in prayer services and in concerts throughout Israel and the world with a variety of musical ensembles, among them, the Israel Philharmonic Orchestra, the Israel Chamber Orchestra, the Jerusalem Symphony Orchestra, the Ra’anana Simphonette, the IDF Orchestra. His wide repertoire includes cantorial and classical music, Hebrew and Israeli songs, and even popular and rock music.

During the past few years, Abramson has presented his cantorial repertoire in numerous Jewish communities in the U.S., Canada, South America, Australia and Europe, with the intention of developing and strengthening ties with Jewish communities around the world, and intensifying connections with Israel and with the IDF.

To date, Shai has produced two CD’s that include recordings of Israeli music and songs deriving from Jewish sources together with symphonic arrangements of classical cantorial and liturgical selections.

By virtue of his warm voice, impressive personality, striking appearance, and his command of Hebrew, English, and Yiddish music, Shai, a lyric tenor, succeeds in emotionally connecting a variety of different communities to the world of Jewish tradition and music. 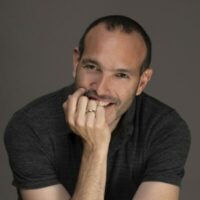