A modern day ensemble that delivers the unexpected. Inspiring and energetic, New York-based chamber music ensemble SHUFFLE Concert changes the rules of performance as we know it. Conceived by SHUFFLE’s artistic director and pianist, Eliran Avni, SHUFFLE was born while Avni was exercising on the elliptical machine at the gym. His MP3 player jumped from a Pretenders song to the first movement of Prokofiev’s Fifth Symphony, nearly causing him to lose his balance… and thus, the idea for SHUFFLE was born!

Unique to SHUFFLE’s performances is the manner in which the program is selected. The audience is invited to actively participate in the selection of works to be performed by choosing from a menu of over 30 works derived from 15 different styles, with works ranging from solos and duos, to trios, quartets, quintets and sextets. Genres vary from classical, baroque, and romantic, to Jazz, Latin, and Broadway. The result is a highly engaged audience and a high energy performance.

SHUFFLE’s members are exceptionally accomplished chamber musicians; they are graduates of such schools as Juilliard, New England Conservatory, Oberlin, Manhattan School of Music and Bard College and have all individually won numerous prizes and have performed extensively as soloists and collaborative musicians throughout the world.

SHUFFLE has made six tours of Israel to date, and will be returning for a seventh tour in 2018. In December 2012 the ensemble made its Merkin Hall debut, which was broadcast on WWFM and WQXR, and which included the premieres of new works by Avner Dorman and Jonathan Keren. The ensemble’s debut eponymous CD was released in October 2013, and in 2014, to celebrate its fifth anniversary, SHUFFLE announced its first Composition Competition, awarding prizes to composers Piotr Szewcyzk, Kevin Wilt and Oran Eldor for their original compositions for the ensemble.

2015-16 highlights include performances at the Cooperstown Music Festival and at Merkin Hall as part of ChamberMusicNY’s series in New York; McCallum Theatre, California State University, Chico, Bishop Community Concert Association, and Hutchins Street Square Performing Arts Theatre in California; Michigan’s Berman Center for the Performing Arts; Ohio University’s On The Edge Concert Series; Oregon’s Florence Event Center, Texas’ Cliburn Institute and the College of Idaho. The ensemble was chosen to perform at Weill Recital Hall as one of five ensembles presenting at the prestigious YPCA showcase at Carnegie’s Weill Recital Hall and was featured in the 2000 show of “Young Artist Showcase” hosted by Robert Sherman.

This past July SHUFFLE released its long-awaited Interactive Video Project which allows presenters and audiences to choose their own musical adventure in the comfort of their own home. The video includes five segments, each in a different musical style. The viewer is invited to watch them in any particular order of their choice. In addition, the ensemble also released two short trailer videos from live performances in October 2015 at the McCallum Theatre in Palm Desert, CA and Merkin Hall. The first trailer explains the SHUFFLE rules and the second presents audience responses to the SHUFFLE concept and performances. Both can be viewed on the Media page on the SHUFFLE website.

Upcoming engagements include the Brooks Center for the Performing Arts, Clemson University in South Carolina; Gordon Center for the performing Arts in Baltimore, Maryland; the Vern Riffe – Shwannee State in Portsmouth Ohio, as well as the ensemble’s sixth tour to Israel in April-May of 2017.

HOW SHUFFLE CAME TO BE

“It was like time traveling,” SHUFFLE’s founder, artistic director and pianist, Eliran Avni says. “One minute I was listening to music that was reminiscent of an ’80s dance club and the next, the Siberian wastelands. So I thought to myself, how incredible it would be to perform a concert like that, where the entire program would be based on these extreme stylistic juxtapositions, and I could then take the audience time traveling with me!” Eliran Avni, Artistic Director

“The concept of mixing styles and instrumentation is nothing new. In Beethoven’s time, concert programs often combined different genres and instrumentation. That was the norm. People would bring their picnic baskets and hear two movements of a symphony followed by a couple of arias, then maybe a concerto movement, etc. So, in fact, a SHUFFLE Concert is a contemporary version of what Beethoven and his audience would have expected to hear.” Eliran Avni, Artistic Director

HOW THE PROGRAM WORKS

In SHUFFLE Concert’s original form, a computer program randomly selected the pieces performed, simulating the shuffle mode on an MP3 player. This later transformed into the unique concept of letting the audience decide which pieces would create the program. For perhaps the first time in the modern performance of classical music, the audience decides what happens next on stage. 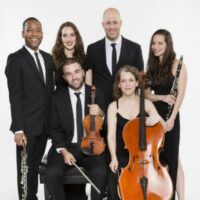