Shalom (Shuli) Rand was born to a religious Zionist family in Bnei Brak. His father, Professor Yaakov Rand, a winner of the Israel Prize for his contribution to special education, is a chazzan. He attended the Or Etzion yeshiva until age 18. After compulsory army service, Rand attended the Nissan Nativ Acting Studio in Tel Aviv and became an actor, abandoning Orthodox practice.

In 1996, he returned to observant Judaism. He later joined the Breslov Hasidic movement and moved to Jerusalem. He is a student of Rabbi Shalom Arush. Rand withdrew from acting to realize his religious aspirations, but after a six-year hiatus he returned to the theater, performing in one-man plays.

Acting and film career
Rand rose to stardom at age 26 after playing the lead role in Andrzej Wajda's play The Dybbuk at Habima theater. Rand was chosen Israel's Theater Actor of the Year several times. In 2004 Rand wrote, directed, and starred in the film Ushpizin. He cast his wife, Michal Batsheva Rand, also a baalat teshuva, as the protagonist's wife. While Michal Batsheva had no prior acting experience, Rand insisted on playing opposite her rather than another woman for halakhic reasons. In keeping with the halakhic standards of tzniut (modesty), the fictional husband and wife do not touch each other on screen.

Singing career: After Ushpizin, Rand embarked on a music career, performing mostly for secular audiences. In 2008 he released his first album, Nekuda Tova ("Good Point") with 11 songs, which he composed himself based on the teachings of Rebbe Nachman of Breslov. Over 30,000 copies of the self-released CD were sold within 4 months, and it was awarded a gold album in Israel. 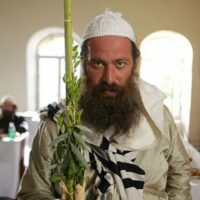