Israeli guitarist, bassist, band leader and composer Tal Mashiach was born and raised in Harashim, a small village in the Galilee mountains in northern Israel. started his musical journey playing classical guitar at the age of 10, as a classical guitarist Tal won first prize at the National Guitar competition in “Jerusalem academy of music and dance” . At the age of 18 Mashiach drafted to the Army as an exceptional musician. at that time he started playing Jazz on the double bass. In the winter of 2015 at the age of 21, Mashiach moved to New York after receiving a full scholarship from the “New School for Jazz” .

Beside his work as a sideman Tal is a composer, leading his own group : “TM Street Band” and Co leading “GTO Trio” with Gadi Lehavi and Ofri Nehemia .
Mashiach was awarded the prestigious AICF grants for Jazz and classical music in the Period between 2006 – 2016, with excellence grant in 2008/09 (classical guitar) and in 2014/15 (Double Bass) 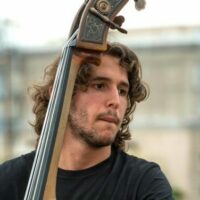