Talia Amar was born in 1989 in Jerusalem. She began studying piano at the age of 6 with Mrs. Luisa Yoffe and composition at the age of 14 with reknown composer Prof. Mark Kopytman.
She graduated her piano studies with honors with Prof. Emanuel Krasovsky at the Buchman-Mehta School of Music and earned her B.M. in composition with honors under the guidance of Dr. Ari Ben-Shabetai and Prof. Yinam Leef at the Jerusalem Academy of Music and Dance.

She has taken part in analysis classes with Michael Levinas at the CNSDMP (Conservatoire National supérieur de musique et de danse de Paris.)
In 2011, she participated in the prestigious Royaumont composition course at the Royaumont Abbey in France.

She is currently studying for her M.M. at the Mannes College of Music in NYC with Prof. Mario Davidovsky in composition and Victor Rosenbaum in piano.
She has attended master classes in composition with renowned composers such as: Brian Ferneyhough, Hector Parra, Marc Andre, Philippe Leroux and Michael Levinas. In piano, she has participated in master classes with Murray Perahia, Nikolai Petrov, Jerome Rose, and Richard Goode.

She has won several awards in international competitions such as: London Ear Festival (England-2013), North-South Consonance Composition Competition (USA-2010), International Music Prize for Excellence in Composition (Greece-2009), 8th Italian Percussions Competition (Italy-2010), IBLA (USA-2011), TIM (Italy-2010), and has consecutively been awarded scholarships from the America-Israeli Cultural Foundation both in piano and composition (with honors). Additionally, she has been made an Honorary Associate of the National Academy of Music in Greece.
Most recently, Talia won the prestigious Klon Award for young composers granted by the Israeli Composers League in 2012.

Her compositions have been performed in France, Berlin, London, USA, Greece and Israel by ensembles such as : North-South Consonance, Meitar Ensemble (Tedarim project), Uroboros Ensemble, Les cris de Paris, and Ensemble Recherche du Midi. Various works have also been performed by ensembles at the Jerusalem Academy of Music, including her Octet which was performed during the “Visible Sounds Congress” in Jerusalem. 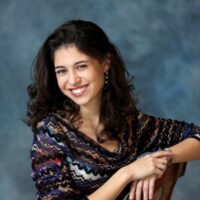