One of the most outstanding and exciting pianists of the young generation in Israel today, Victor Stanislavsky enjoys an extensive international career that has taken him to numerous countries in Europe, the Far East, and to North and South America. In the passing concert season he has given over 60 performances as a soloist with orchestras, as a recitalist and as a chamber musician to critical acclaim. Victor has performed on the stage of such important venues like the prestigious ‘National Performing Arts Center’ in Beijing, the “Forbidden City Concert Hall” in Beijing, “Wuhan Grand Theater”, ‘He Luting’ Hall in Shanghai, the Bass Performance Hall in Fort Worth, Texas, the ‘Rosza’ Center in Calgary, Canada, the “Tsarytsino” Palace in Moscow and the “St. Martin in the Fileds” church in London among others. Important Festival performances include “Ravinia” (Chicago), “Shanghai Piano Festival”, “Meet in Beijing”, “Israel Festival” (Jerusalem), “Eilat International Chamber Music Festival”, and Maestro Gergiev's “Classic at the Red Sea Festival”. Moreover, Victor has recorded extensively for the Israeli Radio and Television and to Radio stations across the U.S.

Stanislavsky enjoys his professional time teaching as well and despite his young age, he has already given master classes at the Shanghai Music Conservatory and at the Calgary University.

Victor has been a recipient of the America-Israel Cultural Foundation scholarships since 2000 and completed a full 3 years of service in the Israeli Defense Forces under the status of an “Outstanding Musician”. 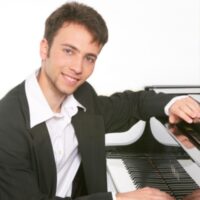