Lauded by The New York Times for his “strong imaginative programming,” Yehuda Gilad takes an innovative approach to music-making, which has earned him a reputation as one of today’s most dynamic and charismatic artists. A conductor, instrumentalist, and teacher, he strives for “total musicianship,” and as a result, he has won the acclaim of both critics and audiences alike.

Currently Music Director of the Colburn Orchestra, Gilad served as Music Director of the Colonial Symphony of New Jersey from 1988-2003. According to The Star-Ledger, he “transformed the Colonial Symphony into one of [New Jersey’s] artistic trendsetters.” Other music directorships have included the 20th Century Unlimited concert series (Santa Fe, New Mexico), the Thornton Chamber Orchestra, and the Santa Monica Symphony Orchestra. His appearances as a guest conductor have garnered critical acclaim in the United States, Asia, and Europe, where he has conducted throughout Spain, Sweden, Germany, and France. In 1987, he became the first Israeli-born conductor to perform in China and has since conducted numerous engagements in Beijing and Shanghai. Over the course of his career, he has collaborated with nearly every leading artist, including Gil Shaham, Joshua Bell, Sarah Chang, Pepe Romero, Joseph Kalichstein, Vladimir Feltsman, and Anne-Marie McDermott.Additionally, Gilad has had an instrumental role in the founding and forming of several notable festivals. From 1982-1993, he directed the Malibu Strawberry Creek Music Festival, hailed by the Los Angles Times as “a summer festival in which inspired, enthusiastic performance and intelligent, varied programming are the norm.”

An accomplished clarinetist, Gilad has performed at top music festivals across the country, including the Marlboro Music Festival and Santa Barbara’s Music Academy of the West. He also founded the Yoav Chamber Ensemble, which performed at Carnegie’s Weill Recital Hall and Merkin Hall in New York, and the Colburn Woodwind Chamber Players, which toured Germany, China, and the United States. Gilad is also a renowned teacher, having developed one of the most prestigious clarinet studios in the country. His students can be heard throughout the world, and many are members of major orchestras including the New York Philharmonic, the Cincinnati Symphony, the Minnesota Orchestra, and the Stockholm, Hong Kong, and Seoul philharmonics. His students have won prizes at most of the top competitions, such as the New York Philharmonic Young Artists Competition, the International Clarinet Association Competition, the Carl Nielsen International Clarinet Competition, Munich’s ARD International Music Competition, and the Prague Spring International Music Competition.

In addition to his professorship at the University of Southern California and position as master teacher at the Colburn School Conservatory of Music and School for the Performing Arts, Gilad is regularly invited to present masterclasses and performances at music conservatories and festivals worldwide. He has been invited to such institutions as Kings College (Sweden), the Winter Festival in Spain, the Curtis Institute, the Glenn Gould School at the Royal Conservatory of Music in Toronto, the Curtis Institute, the Juilliard School, Mannes College, and the Manhattan School of Music.

Whether at home or abroad, Gilad is passionate about arts education and expanding the role that orchestras play within the community. This passion has led him to champion American and contemporary music, as well as educational programs that bring professional level orchestras into public schools. As the music director of the Colonial Symphony, Gilad established the orchestra not only as a premier regional orchestra but also as an active teaching orchestra, integrating their performances into urban and suburban schools’ curricula. His dedication to fostering increased public appreciation and support of classical music has led to frequent appearances on international television and radio. Gilad fulfilled a child’s wish through the Make-A-Wish Foundation by spending a day meeting and teaching a clarinet student with cancer.

Among the many honors and awards Gilad has received are the Distinguished Teacher Award from the White House Commission on Presidential Scholars and the Israel-America Cultural Foundation Scholarship. Furthermore, under his leadership as Music Director, the Colonial Symphony received NEA grants for seven consecutive years as well as two Distinguished Arts Organization Awards from the New Jersey State Council on the Arts for its artistry and program merits.

Born and raised on a kibbutz in Israel, Gilad began his musical education at the age of 16. Following his conservatory studies, he immigrated to the United States in 1975 to further his education. His former teachers were Giora Feidman, Mitchell Lurie, William Schaefer, Daniel Lewis, and Herbert Zipper. Gilad was also an active participant in numerous intensive masterclasses with the late Sergiu Celibidache and Leonard Bernstein. 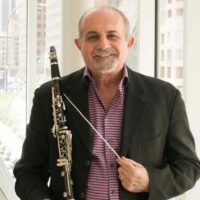