Zigi Ben-Haim was born in Bagdad, Iraq. At the age of five his family fled the country to Israel via Iran. Zigi spent most of his adolescence in Tel-Aviv and studied at The Avni Institute of Fine Arts from 1966 to 1970. After he moved to the United States, he enrolled in the California College of Arts & Crafts in 1971 and received M.A. from J.F.K. University in 1973 and M.F.A from the San Francisco State University in 1974. In 1975 he became a U.S. citizen, and has been living and workin in lower manhattan, SoHo, ever since.

In the early 1970s, Zigi used discarded newsprints and industrial paper, which he found on the streets of SoHo to construct his formations in paper, 3-dimensional paintings, collages and sculptures. Many of these works are in collections of museums around the world. In the early 1990s, the industrial aluminum material replaced the found paper. He has been creating paintings, 3 dimensional installations, indoor and outdoor sculptures until today. From time to time, he finds himself experimenting with other materials like concrete, film, ropes, burlap to make his conceptual point- creating footprints of culture and nature as they collide and coincide to form a new experience.

Zigi received many awards and grants from institutions including Pollock-Krasner Foundation, National Endowments for the Arts, New York State Council on the Arts, The German Academic Exchange Service(DAAD), Emily Harvy Foundation Venice, Muestra Int. de Obra Grafica (Spain), and the Ministry of Culture in Insrael. His works are included and exhibited in numerous public and private collections around the world, including the Guggenheim Museum in N.Y.C., the Jewish Museum, the Brooklyn Museum, the Israel Museum, and the Tel-Aviv Museum.

Current Projects: PoeTree is a series of individually commissioned sculptures intended to be ‘planted’ in various locations around the globe. Each PoeTree is fabricated in painted aluminum shaped as a tree, attached to a stone bench with metal stationary wheels. Four PoeTrees are already in place; two in Valbonne, France on a private estate, the third at the Heart Center of Sheba Medical Center in Israel, and the fourth in the Neeman Gardens in Tel-Aviv, Israel. A poem is carved into each bench. Each installed in its own unique environment, these trees take root in the changing culture and nature of their surroundings. The owner or the commissioner of the sculpture chooses the poem, decides on the color of the upper part of the ‘tree,’ as well as the type of stone from which the bench will be created. In most cases, the stone is native to the country where it is planted. 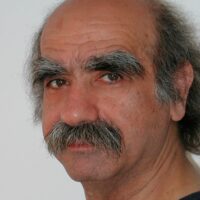