Ady Cohen is a film composer who also composes music for the stage, TV and concert hall, and an Associate Professor of Contemporary Writing and Production and Film Music at Berklee College of Music in Boston. He is the winner of the 2012 ACUM (Israeli ASCAP) Award for Best Score for a Children’s Film (for his score to the successful “Silverfish”), and the 1998 Israeli Academy Award for Best Film Score. The film, "Dangerous Acts", won seven Academy Awards including Best Director.

Having come from a family of musicians (most of them with the Israel Philharmonic Orchestra), Ady was naturally drawn into the world of music, and soon enough became very successful at it. On the basis of his early work, the late Maestro Leonard Bernstein became Ady’s patron and sponsored his studies at New York University where he graduated with Honors as a Bachelor of Fine Arts. He proceeded to win numerous international awards and scholarships, including the support of the America-Israel Cultural Foundation in 1985.

Ady has composed over 50 film scores in Israel, the USA and Europe. He has written the music for numerous theater plays and dance performances, as well as for TV films and series. His talents are also employed by the advertising industry in TV, cinema and radio commercials and jingles.

As a composer who specializes in dramatic music, Ady’s unique ability to compose in different musical idioms, combined with his sensitivity to atmosphere and nuance, has led him to work in diverse genres: drama, comedy, action, suspense, thriller, children, teens, narrative as well as experimental films, and last but not least, his favorite: animation. His passion for animation and mastery of this genre has proven to enthuse and move audiences worldwide, as manifested in dozens of millions of YouTube views, accompanied by rapturous, admiring comments, mostly for his Fox International Channels BabyTV music.

His remarkable success in composing music scores for numerous animated films and TV series culminated in his most recent accomplishment, 65 minutes of music for the breath-taking, exciting, energetic and moving epic score he has composed, orchestrated and conducted for the animated feature film “The Legend of King Solomon”, a Hungarian-Israeli co-production.

Thanks to his worldwide reputation as a composer, Ady was recently chosen as one of the final three candidates to become the Chair of Film Scoring at the distinguished Berklee College of Music, following years of working as a lecturer on Film Music and Sound Design at several prestigious colleges and art academies, such as the Screen-Based Media Department at the Bezalel Academy of Arts and Design, Jerusalem and the Israeli Animation College, Tel Aviv.

Ady shares his life with Bavat Marom, a world-renowned opera singer, their 2 children Lyle and Noot, and millions of cats. 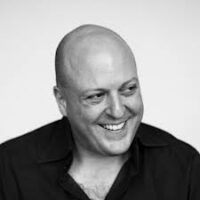