Boaz Vaadia (1951–2017) is an Israeli-born artist, best known for his figurative sculptures which he made by carving and stacking stones that he found in the area surrounding his New York studio, died on Saturday at his home in Manhattan at the age of sixty-five, Daniel E. Slotnik of the New York Times reports.

Vaadia said, “I work with nature as an equal partner . . . That’s still the strongest thing I deal with today, that primal connection of man to earth. It’s in the materials I use, the environments I make and the way I work.”

Born in Gat Rimon in 1951, Vaadia grew up in a rural community where his parents, Nissim Vaadia and Rivka Horozlaski, farmed strawberries. In 1968, he enrolled at the Avni Institute of Fine Arts in Tel Aviv but was drafted into the Israeli Army just a year later. After completing his service, he returned to school and began teaching there after graduating. In 1975, with a grant from America-Israel Cultural Foundation, he relocated to New York, where he studied at the Pratt Institute. The artist said he thought the move was “the worst mistake of my life,” but “within one week I actually recognized that the urban environment of New York is as natural as my village.”

Vaadia began collecting materials such as slate, shingles, bluestone, and boulders after he discovered an ongoing construction project near his studio in SoHo. As workers ripped up the bluestone sidewalk, Vaadia carried the discarded material to his loft, where he worked with a hammer and chisel to further expose the sedimentary layers of the rocks. Inspired by the stratified layers, he began creating sculptures that echoed the natural composition of his materials.

As his artistic output grew, he relocated to a studio in Williamsburg and started collecting boulders, but he was eventually forced to order materials. Primarily named after biblical figures, his public works can be found outdoors in parks and in front of businesses, as well as in the collections of institutions such as the Metropolitan Museum of Art, SF MoMA, the Bass Museum of Art, and the Tel Aviv Museum. Vaadia’s family plans to convert his studio into a museum. 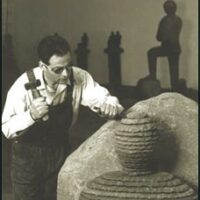