Itamar's music holds a depth and sensitivity that touches listeners deeply.
It blends the delicateness of Middle Eastern music, the freedom found in jazz and the passion of flamenco, creating a unique sound all his own. Recipient of the 2014 ACUM Prize for Special Achievement in Jazz and the prestigious 2014 Landau Prize, Itamar Erez is an internationally renowned composer and guitarist who has shared the stage with such musicians as Omar Faruk Tekbilek, Jean-Louis Matinier, Zohar Fresco, and others.

Itamar has released 4 CDs so far, two with his quartet The Adama Ensemble: “Desert Song” (2006) & “Hommage” (2010), “New Dawn” (2013), is a duet collaboration with Yshai Afterman (percussion), with special guest Antonio Serrano (harmonica).
His most recent CD “Mi Alegria” was released in June 2019 with the support of the Canada Council for the Arts, and has received raving reviews, both nationally and internationally, including a nomination for the 2020 Instrumental Artist of the Year Award from the Canadian Folk Music Awards.

At the 2021 Vancouver International Jazz Festival, Itamar has participated as a leader of the Itamar Erez Quartet, as well as a workshop facilitator, discussing his musical work, creative process and inspiration. A new CD is in the works, coming out in 2022!

In 2022 Itamar was chosen to showcase his quartet at ‘JazzAhead’ music conference in Bremen (Germany), and presented a 45 min set of his original music.

In 2023 Itamar is planning more touring and has already some gigs with ‘International Guitar Night’ lined up, together with amazing artists Jesus Guerrero and Jocelyn Gould.

As a composer, Itamar has written for various chamber ensembles and groups (such as the ‘Sound Of Dragon Ensemble’), as well as numerous pieces for the classical guitar.
Compositions such as ‘Yahli’s Lullaby’, ‘Morning Song’, ‘Choro for Lulo’ & ‘Choro Sentimental’ are often played by concert guitarists in recitals. Matt Palmer & Daniel Bolshoy are among the international classical guitarists who played and premiered Itamar’s music.

Apart from his busy composing and touring life, Itamar is also teaching at the guitar, jazz and world music faculty at the Vancouver Symphony Orchestra School Of Music.
For more current info and getting in touch with Itamar please go the website: 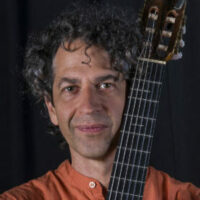