Ivry Gitlis was born on August 22, 1922, in Haifa, Israel, to Russian parents. He received his first violin at the age of five and gave his first concert at age ten. When violinist Bronislav Huberman heard him play, he sent him to study at the Conservatoire de Paris, where he won a first prize at age 13. After graduation, he studied with George Enesco and Jacques Thibaud, among others.

In 1939, he went to England, and when World War II broke out, he worked in a British munitions factory and later in the entertainment unit of the British army.

Ivry Gitlis is considered one of the most talented musicians of his generation, and many of his recordings are considered classics. His first recording, "Le Concerto à La mémoire d'un ange," by Alban Berg, won the Grand Prix du Disque (Grand Record Prize) in France. Bruno Maderna wrote "Piece for Ivry" for him, and in 1972, Ivry Gitlis premiered "Mikka" by Xenakis.

Gitlis passed away in December 2020. 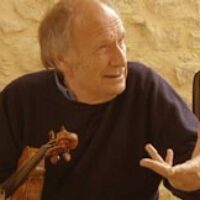