About Goodman Theater and Acting School

The Goodman Acting School of the Negev was founded in the year of 2005 and trains young actors and actresses professionally for performance in theater, television and cinema ever since. The school employs a cadre of the most exceptional teachers, masters of their respective crafts in the professional industry. The school cares to integrate its alumni in all of Israel’s prominent theaters and cultural institutions and serves as a beacon of art and culture for the citizens of Be’er Sheva and its surrounding towns and cities.

The school takes part in the founding and development of cultural institutions that support creating a prominent southern art scene and involve many of the school’s alumni, such as the Children and Youth Theatre of Be’er Sheva, the Center of Excellence in Theater, the Fringe Theater of Be’er Sheva, theater groups, dedicated theater departments in the education system, urban art festivals and more.

The school maintains relations with international schools and institutions, takes part in local and international festivals regularly, and wins prizes.

Brief History:
The idea of founding an acting school in Be’er Sheva that will attract the young aspiring actors and actresses of the south and the Negev started with Mr. Shmulik Ifrach, former CEO of the Kameri Theater, school principal and CEO of the Be’er Sheva Theater, and the Mayor of Be’er Sheva Mr. Ruvik Danilovich. Thanks to their vision and persistence, the dream became reality in the year of 2005 and in a short time the school established itself in the forefront of cultural institutions in Israel.

The school’s first donation was granted by the Minister Shimon Peres, at the time spearheading the Office of Negev and Galil Development, as a sign of support in its vision. From that day, the school became a prominent factor in the cultural happenings of the Negev and a leading acting school in Israel.

As part of the study program, the school performs 6-8 professional theater productions of a wide variety of plays both local and international, with the best directors and specialists in the industry. The plays are open to the wide audience.

The school works closely with the Be’er Sheva Theater and every year alumni of the school are welcomed into the theater’s group of actors and actresses.

The school has 4 classrooms equipped with sound and lighting equipment, a dance studio, a rich library filled to the brim with plays and books, makeup and dressing rooms, props room, outfits and costumes room, personal lockers, kitchen, and showers.

The Small Hall contains 80 seats and is reserved for plays demanding an intimate space.

Patio is an open space under the open skies for shows of up to 100 audience members. 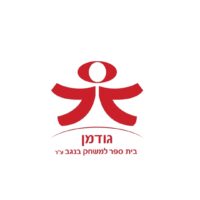