Bruce Burger (born July 11, 1957, Utica, New York), known by his stage name RebbeSoul, is an American-Israeli Jewish singer, songwriter, multi-instrumentalist, composer, and producer. Performing since the early 1990s, he has released five solo albums and has recorded with the bands Hamakor and Common Tongue. He has also collaborated with singer Shlomit Levi of Orphaned Land for the world music duo Shlomit & RebbeSoul.

Burger is known for his diverse sound, drawing from a variety of styles and cultures. Over the course of his career, he has gradually expanded from a conventional Jewish rock sound to incorporate folk, soul, jazz, new-age and worldbeat, as well as sounds from South American, Caribbean, West African, Middle Eastern, Yemenite, and Sephardic music. Although primarily a guitarist, he also uses a wide variety of instruments in his music, most notably the balalaika. Burger attributes his eclectic sound to his years as a session musician, where he was forced to be a "chameleon" and play in many different styles.

While Burger occasionally sings on his albums, he places greater emphasis on his instrumental work, saying, "I am a player that sings, not a singer that plays" 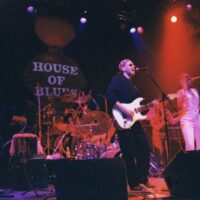