During her studies she participated in various projects:

Susanna, “Le nozze di Figaro” by Mozart, at the Buchmann Mehta school of Music, accompanied by the Netanya Kibbutz Orchestra.

“The Squirrel” from the opera “l’enfant et les sortileges” by Ravel, at the 2017 IVAI Summer International Opera Workshop in Tel Aviv

Participated in a Master Class with the international conductor Dan Ettinger at the Buchmann-Mehta School of Music in the spring of 2018.

Participated in the IVAI International Opera Workshop in Tel Aviv on summer 2016, There she sang in a Master Class with the international soprano Chen Reiss.

As a part of her participation in the IVAI summer opera workshop over the last three years, worked with highly professionaland well known teachers, among them Patricia Mccaffrey, Mark Scnaible, Kevin Murphy and more.

Performed at the 2017 IVAI gala evening, as Frasquita (The card scene -“Carmen” by Bizet) conducted by Chris Crance.

A Soloist in the Buchmann Mehta School chamber choir:

Sang the soprano solo in “Psalm 42” by Mendelssohn, “The Coronation Mass” by Mozart, “Dixit Dominus” by Handel and more, conducted by Ronen Borshevsky.

A soloist in concerts with “Hasharon Orchestra”, conducted by David Sofer at the Kfar Shmaryahu Cultural Center and at the Acre Conservatory, conducted by Tomer Hesseg.

Tom was invited to sing at the WIZO Women’s World Gala evening in Vienna, Austria, on autumn 2016.

Tom was invited to sing in the international piano workshop in Sde Boker on summer 2017.

Tom achieved the Dan Ben-Bassat scholarship of Excellence from the Buchmann-Mehta Academy of Music for of 2018.

Achieved the Buchman Mehta School of Music scholarship of excellence for 2017. 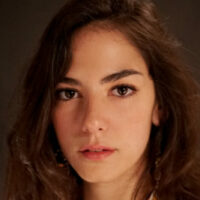