Born in 2001, pianist Tomer Domani enjoys a vibrant schedule as a recitalist and chamber musician. His character and excellence have led him to play on the national Israeli classical music radio station and on the national Belgium TV channel TVCOM.BE.

Domani began his musical education at a young age with Ms. Rita Gotlibovich.
He graduated from Metro-West high school in the summer of 2019 with the highest of marks in music major. He is recognised by the Israeli Ministry of Education and by the IDF as a “Prodigy” in the field of music, a title which is rarely awarded.

He was awarded scholarships from the “America-Israel Cultural Foundation” (2018-2021), and from the Swiss foundation “Rahn Kulturfonds” (2021). He has taken part in the “Aldwell” Masterclass Program in Jerusalem, of which the Honorary President is the internationally acclaimed pianist Murray Perahia. He has hence had masterclasses with many world renowned pianists, such as: Peter Frankl, Sonia Rubinsky, Gilbert Kalish, Jerome Lowenthal, Sandro D’onofrio, Natalia Trull, Olga Pashchenko, Jacques Rouvier and many more.

He gave his first solo recital in Switzerland in the “Sobrio Villaggio della Musica” Festival, in 2021. Since 2019, he has been studying with Prof. Nora Doallo at the “Conservatorio della Svizzera italiana” in Lugano, Switzerland. 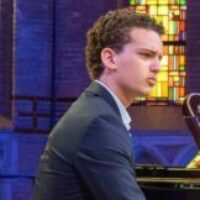