Pianist Assaff Weisman’s performances have taken him to some of the major venues in Europe, the Middle East, and the Americas, including appearances at the Rudolfinum in Prague, Beethovenhalle in Bonn, Philips Hall in The Hague, and Lincoln Center in New York. He has appeared as a soloist with the Sioux City Symphony, the American Chamber Orchestra, the Connecticut Valley Chamber Orchestra, and the Orquesta Sinfónica Nacional of Peru. His radio credits include WQXR’s “Young Artist Showcase”, Sirius XM, and The Voice of Music in Israel, as well as multiple appearances on WGBH radio in Boston, where he has recorded repertoire ranging from Bach to André Previn. An avid chamber musician, Mr. Weisman has collaborated with Isidore Cohen, Peter Wiley, and Michael Tree, among others, and he is a founding member and the executive director of the award-winning Israeli Chamber Project, with which he has toured since 2008.

Born in Israel, Mr. Weisman is a graduate of The Juilliard School, where he received both his Bachelor’s and Master’s degrees as a student of Herbert Stessin, and where he now is a member of the Evening Division piano faculty. Prior to his studies in New York, he studied with Professor Victor Derevianko in Israel, where he was a winner of the America-Israel Cultural Foundation Scholarships. Mr. Weisman is a Yamaha Artist. 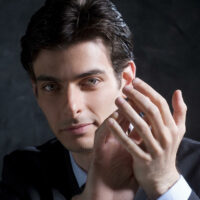