Born in 1991, Bar began studying the violin at age six. He graduated from the Royal College of Music, London in the class of Professor Ani Schnarch. Bar received support towards his musical education and journey from the RCM, Polonsky Foundation, Keshet Eilon, PLFA, Strauss and AICF.

Combining virtuosity, captivating sound and high versatility across different styles and genres, award-winning Violinist Bar Markovich can pull a show-stopping performance in any scenario. His latest original music concept has led to a host of commercial successes including performances around the world, and also for well-known broadcasters and international magazines.

When it comes to performing, Bar has performed on some of the world’s most prestigious stages such as Carnegie Hall (NY), the UN assembly (NY), Teatro Alla Scala (Milan), Théâtre du Châtelet (Paris), Philharmonie (Berlin) and Plaza de Toros (Seville). He also shows his unique creativity in his most recent music videos where he has made nature his stage, combining his passion for music with the stunning landscape that surrounds humanity while indulging in different cultures.

Bar’s recent original work has led to a worldwide acknowledgement from winning the GoPro Awards through to performing at high profile events in Europe and USA for Dolce & Gabbana, Dior, Shiseido, Make A Wish, BBC, Channel 4, Deutsche Welle and more. 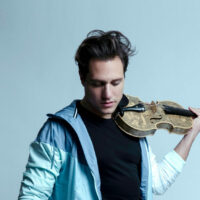