About Daniel and Alex Gurfinkel

Born in 1992, twin brothers Alexander and Daniel started their clarinet and music education in the year 2000. In 2004, at the age of 12, they were invited by maestro Zubin Mehta to the solo position at the annual concert for young musicians with Israel Philharmonic Orchestra performing Krommer’s Double Concerto under the maestro’s baton.

In the 2010 – 2011 Season, Duo Gurfinkel was invited to play again with M° Mehta and the Israel Philharmonic as well as with the international orchestra of Zagreb Philharmonic, Belgrade Philharmonic, Vienna Tonkünstelr Orchestra, Kiev (Ukraine) as well as a tour in France of 11 concerts with the Orchestre National des Pays de la Loire under the baton of the Egyptian Conductor Nader Abbassi, Moscow Virtuosi & the Israel Symphony Orchestra Rishon LeZion.

Duo Gurfinkel’s engagements include performances in Switzerland (Mendelssohn Concerto for Two Clarinets) at the “Moscow Meets The Friends” festival, with the Moscow Virtuosi Chamber Orchestra under Maestro Vladimir Spivakov and Los Angeles under the auspices of Zubin Mehta and in 2007 with Yuri Bashmet and the Moscow Soloists at the Tchaikovsky Hall, in Ekaterinburg and the Capella Istopolitana at the Rheingau Festival.

Clarinet Duo Gurfinkel maintains a family tradition of three generations. Their grandfather Arkady Gurfinkel was a well-known clarinet player, teacher and arranger. Their father, Michael Gurfinkel is among the leading clarinet players in Israel, the Principal Clarinetist at Israel Symphony Orchestra (and Israeli Opera), an outstanding chamber music player and performs with various ensembles in Israel and abroad. 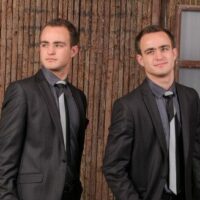