Daniel Borovitzky was born in 1991 in Samara, Russia, and immigrated with his family to Israel at the age of three. He started his piano studies at the age of eight. Among his teachers were Luisa Yoffe at the “Sadna” Conservatory in Jerusalem and Prof. Arnon Erez. He has fulfilled his army service in Israel with an “outstanding musician status”. He completed his bachelor's degree studying with Prof. Tomer Lev at the Buchmann-Mehta School of Music at Tel Aviv University. In 2015-2016 he studied at the Yale School Of Music, Yale University. In this current year will continue his Master's studies at the Köln Hochschule für Musik.

Daniel toured North America, South America, Europe & the Far East. As soloist, he performed under the baton of Zubin Mehta at the Mann Auditorium in Tel Aviv with the Buchmann­-Mehta School of Music Symphony orchestra, as well as with the St. Petersburg Philharmonic, The Israel Chamber Orchestra, the Haifa Symphony, Tel Aviv soloist ensemble and others. In September 2015 he recorded with The English Chamber Orchestra the Triple Piano concerto of Mozart together with the “MultiPiano” project headed by Prof.Tomer lev. Among the halls in which he performed are “Teatro Colon” and “Gran Rex” in Buenos Aires, the “Konzerthaus” in Berlin, The Beijing Central Conservatory concert hall, “Teatro del Sodre” in Montevideo, “Teatro Santa Ursula” in Lima and other halls throughout Russia, Germany, Brazil, Taiwan & Serbia.

Daniel recorded for several Radio & TV stations, including live broadcasts, such as “Radio Nacional” & “TV Publica” of Argentina, the Radio/TV Stations of Berlin & Montevideo, as well as numerous performances for “The Voice of Music” at the Israeli Radio.

Daniel participated at the Tel Hai International Master Classes, In The Holland Music Sessions festival in Bergen, in 2013 he was granted a full scholarship from the American-­Israel Culture Foundation to participate in the prestigious Aspen Music Festival where he studied with Mr.Anton Nel.
Among the pianists and teachers, Daniel had played for are Dmitrii Bashkirov , Andras Schiff , Gilbert Kalish, Jacque Rouvier and many other distinguished pianist and pedagogues. 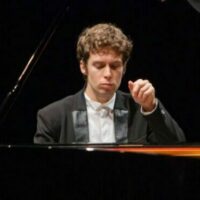