Drummer, multi-instrumentalist Daniel Dor has established himself as an important new voice in today's Jazz world. Critics and peers alike praise him for his unique sound and originality as an improviser and composer.

Dor performs all around the globe at top-class festivals and music halls, and has shared the stage with music greats such as Avishai Cohen, Yotam Silberstein, Ravid Kahalani, John Patitucci, Petros Klampanis, Noa, Billy Harper, Matisyahu, Robert Sadin, Diego Urcola, Daniel Zamir, Kurt Rosenwinkel, Dorantes, Aaron Goldberg, and many others. Rooted in the Jazz tradition, his playing is influenced by the multitude of cultures he has been brought up with, resulting in a highly emotional, heartfelt lyricism.

Daniel was born 1986 in Tel-Aviv, Israel, to a family of musicians and artists. “I remember listening to my parents’ 4-voice vocal band from backstage as they used to take us around on their tours, surrounding me with music”.

While Daniel’s first musical lessons were at the piano, he was fascinated with the drum-set from an early age and began taking private lessons at the age of 10. Since then, he has graduated with honors from The New School for Jazz and Contemporary Music in New York, as well as the prestigious Thelma-Yellin High School and Rimon School for Jazz and Contemporary Music in Israel, representing them at numerous Jazz Festivals around the world including; 2011 Bern Jazz Festival, 2007 IASJ Festival and 2005 IAJE Jazz Festival. During 2007, Daniel won 1st prize in the national ‘Jazz Player of the Year Competition’ whilst studying at Rimon School. He has also been granted three scholarships by the America-Israel Culture Foundation, as well as three Eubie Blake Scholarship Fund merits for his special talent and abilities.

Daniel’s own project--co-led by guitarist Alon Albagli--“DADALON”, has been named “NYC Best Kept Secret” by Blurt Magazine, and has been taking NYC's music scene by storm, performing regularly as a part of their residency at Rockwood Music Hall, Manhattan. 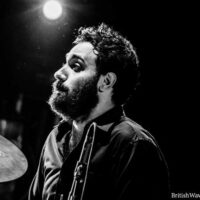