Native of Israel, Daniel Meron succeeds in expressing the diversity of influences from his homeland in his music. Nourished by the tradition of jazz improvisation, but recognizing the value of classical and folklore music, Daniel finds a way to feature his unique playing style in brilliant compositions that are both sophisticated and lyrical, communicating vivid stories and emotions to the listener.

​After graduating from Berklee College of Music and moving to NYC, Daniel released his debut album “Directions”, which gained recognition and praise in the reviews of jazz magazines, radio programs around the world, and leading jazz musicians. The album features Daniel’s trio and quintet with 60 minutes of original music, revealing his distinctive voice both as a composer and an improviser.

​Mr. Meron has performed at renowned venues in Israel such as the Levontin 7, Shablul Jazz, Givataim Theater, as well as on national television. He was a finalist in the Rimon Jazz Competition and the Jacksonville Jazz Piano Competition, and participated in the Costa ​Rica Jazz Festival.

​At Berklee College of Music Daniel was the winner of several scholarships and awards, studying with masters such as Danilo Perez and Joe Lovano. US performances include Florida Theater in Jacksonville, Wally’s Café and Ryles Jazz in Boston, HR-57 in Washington DC, and in NYC at Rockwood Music Hall, Metropolitan Room, and The Living Room.​

​Since his move to NYC Daniel has led several groups and projects. In April 2016 he is scheduled to release his second album entitled Sky Begins, which was recorded with his current band. Featuring vocalist Maia Karo, Noam Wiesenberg on bass and Jimmy Macbride on drums, Sky Begins presents Meron’s most recent songs and compositions. While clearly in the realm of jazz, the music on the album is dynamic and lyrical, traveling through rich harmonies to magical places in time and imagination. The band grooves hard on funky and folkloric rhythms while shifting between energetic improvisation and intimate interaction.

Over the last decade, Meron has established himself as a prominent figure in the New York jazz scene, performing at venues such as Soho House, Mezzrow and Cornelia St Cafe, playing the Jacksonville Jazz Festival, Costa Rica Jazz Festival, and touring Canada, Europe and Israel.

Along with his activities as composer, arranger and bandleader, Daniel continues to perform as a sideman in multiple bands such as the Ayal Tsubery band, Rubycon, and the Arnan Raz Quintet. 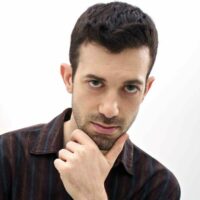