Ella Spector was born in Israel, in 1979. She lives and works in Tel Aviv, Israel

Ella is a cinematic sculptor, enchanted by mysteries, by magic and by the gap between our bodies and the screen. Cinema and fiction allow a choice to believe in illusions, artificial images and surreal ideas. To confront fakeness and yet to be drawn by it.

2010-2012 Established and run ‘Studio Hanamer’ - a props storage and workshop, specialising in scenography and prop making. 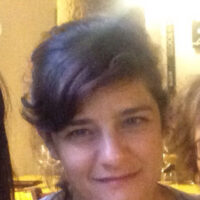